Boy George gets off 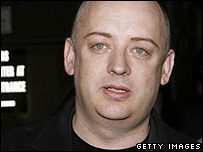 Boy George
The former Culture Club singer has also worked as a DJ
Singer Boy George has had a charge of possessing cocaine dropped by a New York court.

He admitted wasting police time over an incident last October and was sentenced to five days of community service and fined $1,000 (£575).

The singer, whose real name is George O'Dowd, pleaded guilty on Wednesday to falsely reporting a burglary at a brief hearing in Manhattan Criminal Court.

The singer was ordered to attend a drug rehabilitation programme.

The 44-year-old, who made his name as the front man of 1980s pop band Culture Club, attended the hearing.

Judge Anthony Ferrarar warned the defendant that he would have a criminal record which "never goes away".

In a statement released after the hearing, Mr O'Dowd said: "I am relieved and happy that this case has been disposed of.

"I love New York and I'm looking forward to coming back and working in the States later this year."

He had maintained his innocence on the drug charges, which could have seen him sentenced to five and a half years in prison if convicted.

Mr O'Dowd was arrested after police were called to his Manhattan apartment.

Speaking after a hearing last month, Mr O'Dowd's lawyer Lou Freeman said his client had hosted a party and did not know who owned the drug.

Mr O'Dowd was charged with one count of criminal possession of a controlled substance after his arrest.

so he has a criminal record and hes looking forward to coming back to the states? won't he have a touch of a problem at customs?
T

fuck, boy george is looking more like tom hanks in philadelphia than a dragger these days...

Man I loved Boy George and Culture Club growing up.

For my 12th birthday I got "Colour By Numbers" and I barred all my birthday guests into the basement and played Karma Chameleon over and over again about 20 times. For a while everyone was unhappy about it, but then guys started kissing girls and vice versa and for us, Karma Chamelon quickly became the theme to pre-teen petting and now we all look back on it and realize how grand it was.
D

TECHno addict said:
fuck, boy george is looking more like tom hanks in philadelphia than a dragger these days...
Click to expand...

Staff member
You know that Boy won't be getting back into the states if he leaves.... Maybe he will move here... Not that it really matters.

defazman said:
so he has a criminal record and hes looking forward to coming back to the states? won't he have a touch of a problem at customs?
Click to expand...

He's already in the states so it's not a problem. It's just like when Bob Probert got convicted there. If he left he wouldn't be allowed back.
L

considering he was living there, i'm sure he has a green card and is paying taxes on his earning there.