Crazy stampede of kids in that arena. Likely that many injuries were caused by the rush to exit the venue. It holds nearly 20,000. Details are super sketchy but the response - so far - is heartening. As rail service is suspended, some people in Manchester are opening their homes to those stranded and taxis are offering free rides.

"islam is a religion of peace"

Can't wait to see all the CCTV video footage of how the events unfolded, given that the UK is one of, if not THE, most surveilled countries in the world. 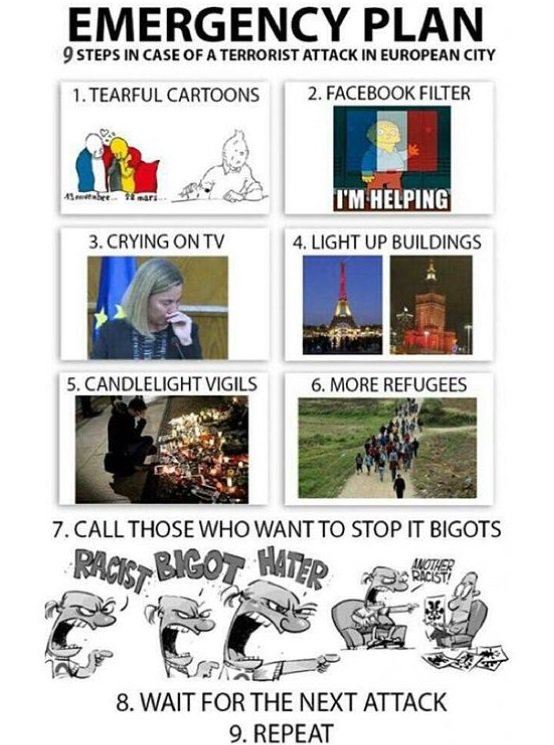 Cause the only people who "want to stop" terrorism are the kind of people who make these cartoons...

Bigots are called bigots when they act like bigots, has nothing to do with who does or who doesn't "want to stop" terrorism.

I take it for granted thats like like 99% of everybody, including the worst partisan democrats and the most horrible partisan republicans.

Its just there's a lot of people who, thinking they are "trying to stop" terrorism when they really aren't.

Killing Bin Laden, otherwise known as "chopping the head off the snake", won't either.

I'm sure the silly, naive, head-in-the-sand liberals targeted by the cartoon won't stop terrorism by changing their facebook picture to whatever is supposed to commemorate the latest attack.

But a lot of people genuinely want to stop terrorism and suggested those things. Its just partisan battling to pretend the other side is cool with dead bodies - problem is people have a series of delusions and rationalizations that protect them from understanding how their ideas don't work, or lead to more problems, or fail to protect people or just cause more death and revenge cycles.

Most war proponents, for example, believe in the nobility and necessity of "the mission" - they are not craving that the blood of innocents be spilled by an occupation and invasion of a sovereign country, even if that will happen during the course of "the mission". They find ways to inure themselves from seeing those consequences or really feeling them.

So the cartoon goes a bit far in suggesting that silly liberals who change their facebook pictures after an attack and call non-bigots, just trying to save america, bigots - that these silly libtards don't want to stop terrorism, like the cartoon author does. Of course they do - of course we all do!
Last edited: May 22, 2017

some people just don't know when to shut the fuck up !
this guy needs to be beaten up real hard.
This Writer's Response To The Ariana Grande Explosion Is Disgusting
Last edited: May 23, 2017

"It should be underlined that local Manchester Muslims were as devastated as everyone else by this attack, and that Muslim cabbies swung into action helping the concert-goers with free rides out of the affected area. Islamic law forbids terrorism.

Ironically, the attack yesterday in Manchester was likely by Sunni radicals (ISIL has claimed it), and came two days after President Trump blamed all terrorism on Shiite Iran at a speech in Saudi Arabia, the proponent of a form of extreme Sunni supremacism. Saudi Arabia’s royal family say they oppose terrorism and they are not responsible for terrorism, but they do give Wahhabis the impression that non-Wahhabis are wretched heretics with whom one cannot be friends."

so are any attacks real? were all those IRA bombs that have gone off in England and Ireland also false flags?

janiecakes said:
so are any attacks real? were all those IRA bombs that have gone off in England and Ireland also false flags?
Click to expand...

*points finger at you in SJW rage* ISLAMOPHOBIA!!!!! 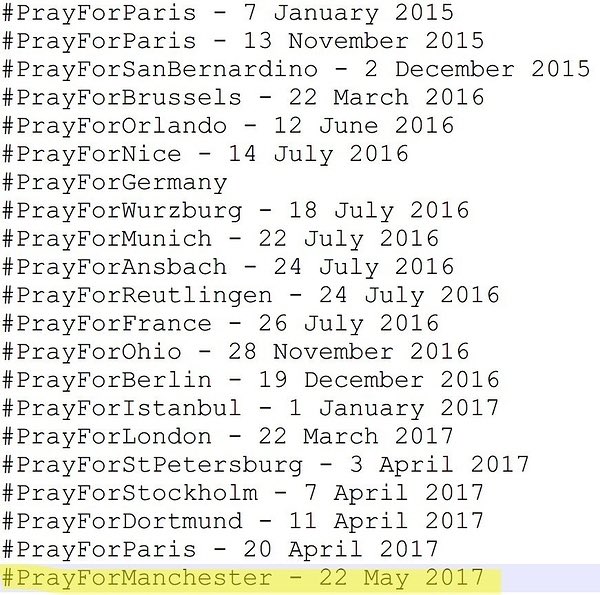 Islamic terror is the new normal in civilized societies unfortunately. Apparently the murderer was the child of refugees, a first generation. Way to repay the welcome.
T

Islamic terror is the new normal in civilized societies unfortunately.
Click to expand...

And according to society, you can't do a damn thing about it...because islamophobia.

tobywan said:
And according to society, you can't do a damn thing about it...because islamophobia.
Click to expand...

That's just white people acting like bitches. We have not been wacked (yet) in Toronto so I have not been in the shit wrt to this however I have a plan. I work with many Muslims, I have (had? they converted) Muslims in the family. We must harness and incentify good Muslims to call out the bullshit Muslims. Then we take the bullshit Muslims and send them to whatever shitty country they came from. I don't understand why governments don't deport these guys and their families who are surveiled doing terror stuff. The problem with my idea is this Grande dummy was born in the UK but he was know to police. This is why I love oriental countries, they don't have white guilt and put up with none of this mess. 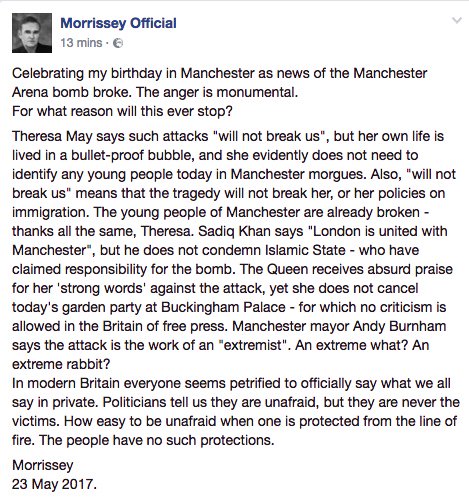 You know you are cucked as a people when frigging Morrissey calls you a pussy.

Moz taking shots at everybody.

I am giving myself flowers in a frilly shirt tonight.

How Media Hype Amplifies the Impact of Terrorism