Bill Cosby's Image Gets Raped by his Reputation

(CNN) - It was not the sort of meme Bill Cosby wanted to generate.

On Monday, the comedian -- or whomever was in charge of his social media -- put out a challenge with a jovial picture of Cosby in a cap: "Go ahead. Meme me! #cosbymeme."

The Internet immediately reacted, but probably not in the way Cosby expected.

By nightfall, Cosby's original tweet had been pulled from the Web, which led to this conclusion from Jensen Karp: "If anyone is looking for a job, the Social Media Manager position for @BillCosby is about to open up."
But if Cosby's social media manager has gone underground, in the Internet age -- where nothing ever goes away -- the rape allegations, which Cosby has repeatedly denied, have stubbornly remained in the open.

In late October, comedian Hannibal Buress bluntly attacked what he perceived as Cosby's "smuggest old black man public persona" by saying, "Yeah, but you rape women, Bill Cosby, so turn the crazy down a couple notches. 'I don't curse onstage.' Well, yeah, you're (a) rapist, so I'll take you saying lots of m*****f*****s on 'Bill Cosby: Himself' if you weren't a rapist."

For years, Cosby has denied the rape allegations. In February, after Newsweek ran an interview with one of the purported victims, Tamara Green, Cosby's representative said, "This is a 10-year-old, discredited accusation that proved to be nothing at the time, and is still nothing."

Nine years ago, when Green was interviewed by Matt Lauer on the "Today" show, his lawyer issued a statement: "Miss Green's allegations are absolutely false. Mr. Cosby does not know the name Tamara Green or (maiden name) Tamara Lucier and the incident she describes did not happen. The fact that she may have repeated this story to others is not corroboration."

In the case of Andrea Constand, who sued Cosby in 2005 over an incident the year before, Cosby says the sex was consensual.

CNN has reached out to Cosby's representative for comment on this story, but has yet to hear back.

My mobile dictionary is to be held accountable for the "Crosby" typo, although if anyone needs me I'll be on the couch with a glass of vino...

Staff member
Was going to change it to Will Crosby. 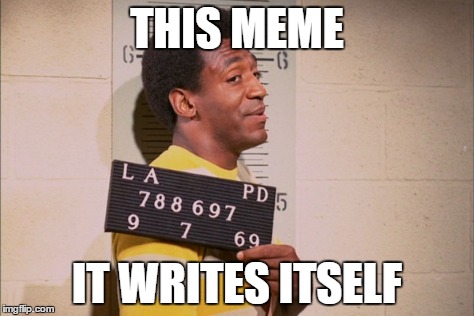 Rape is the new Pedophile.

*Waits impatiently for someone to get upset at previous comment.

i wonder how that lawsuit ended - i.e. how much money she got from cosby.

Bill Cosby raped me. Why did it take 30 years for people to believe my story?

djfear said:
Rape is the new Pedophile.
Click to expand...

Impossible: one is generally a verb the other a noun

Neither win you friends in prison.
E

Oh Jesus, Janice Dickinson? Not the most credible (or stable) of people.

He's holed up with Jian somewhere.

it is crazy that this meme competition will be what kills bill cosby's career, and not the actual multiple rape allegations that came out in 2005.

it is scary to see how almost every single participant in that 2005 discussion decided not to believe the first woman's story. this from a community forum that certainly liked to think of itself as more open-minded than most.

Given the high rate of scammers opportunistically suing VIPs of all kinds in the 1980's onward it isn't surprising that we would take that general opinion. The other accusers didn't come to light until later, and that seems to be what really swings opinion - in the absence of actual hard evidence, corroboration through associated experiences is enough to build a case at least in the social sphere.
E

Klubmasta Will said:
it is crazy that this meme competition will be what kills bill cosby's career, and not the actual multiple rape allegations that came out in 2005.

it is scary to see how almost every single participant in that 2005 discussion decided not to believe the first woman's story. this from a community forum that certainly liked to think of itself as more open-minded than most.
Click to expand...

This. It's always amazing how one man's word is worth more than many women's; there often seems to need to be a "tipping point", which is BS.

As for why victims don't come forward, I don't even know where to start with the reasons: fear, shame, trauma, despair of seeing justice just to name a few.