Whale explodes in Taiwanese city
A dead sperm whale has exploded while being delivered to a research centre near the southwestern city of Tainan.
Passers-by and cars were soaked in blood and body parts were sprayed over a road after the bursting of the whale, which was being carried on a trailer.

The whale had died earlier on a beach and had been collected so its remains could be used for educational purposes.

A marine biologist blamed the explosion on pressure from gases building up in the mammal as it began to decompose.


The whale attracted a lot of onlookers both before and after it exploded.

What a stinking mess - this blood and other stuff that blew out on the road is disgusting, and the smell is really awful
Tainan resident
Several parked cars and pedestrians got covered in blood when it exploded.

Residents and shop owners wore masks while trying to clean up the spilt blood and entrails.

"What a stinking mess. This blood and other stuff that blew out on the road is disgusting, and the smell is really awful," said one resident.


Professor Wang Chien-ping, of the National Cheng Kung University in Tainan, had ordered the whale to be moved to the Shi-Tsao Natural Preserve after his own institution refused to allow a post-mortem examination on its own premises.

He said that the animal had been close to death when it was found on a beach and had died by the time help arrived.

"Because of the natural decomposing process, a lot of gases accumulated, and when the pressure build-up was too great, the whale's belly exploded."

However he said despite the explosion, enough of the whale remained to allow for an examination by marine biologists.

Professor Wang said initial observation showed the whale to be an older bull and that its weight of 50 tonnes and 17 metre-length made it the largest whale ever recorded in Taiwan.

Reports say because of the whale's size, it took 13 hours, three large lifting cranes and 50 workers to get the whale loaded on the trailer truck for its final trip.

This thread is usless without pics.
H 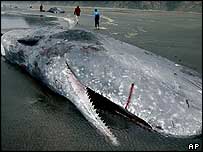 Does not do enough Justice.
B

on You Gotta See This a long time ago they aired a story about a beached whale that was so big, it was decided that the only way to get rid of it was to blow it up with dynamite. right before they were going to detonate it, someone asked if they had used enough dynamite and they all said 'yeah you're right we better add a whole lot more'

the video footage shows people a half mile away being covered in a pink mist of whale blubber and dodging giant 30 pound (or something) chunks of whale meat falling from the sky! one massive piece lands on a car roof and completly crushes the car.

i have it on tape and used to get drunk and make all of my friends watch it whenever they came over but now i don't have a vcr so i can only replay it in my head.
A

I've see that video bitchass. It's a fucking beautiful spectacle to watch.

Well, I WAS looking forward to lunch...

when it comes to surviving exploding whales: Moped 1, Cars 0
C

I don't know, I'd argue that there were no winners in that contest.
B

here's a really crappy video of the purposely-exploded whale i mentioned. the commentary is gold! and you can hear an old lady telling someone 'its ok you can take your fingers out of your ears now' then they all run as chunks of whale meat rain down upon them!

the version i had was even better, with additional updated commentary and a guy trying not to kill himself laughing about how it had all gone down.

Originally posted by Dr Funk MD
I don't know, I'd argue that there were no winners in that contest.
Click to expand...

i don't know...considering it was a sperm whale...it exploded 'cause it had pressure building up...
N

yeah, i was wondering that too....why is there like not a single mark on the moped??
unless they parked it in whale insides after the fact...

GOLD!...I'm willing to bet the farm that he barfed everything he had from a week ago!
H

Originally posted by chooch
i don't know...considering it was a sperm whale...it exploded 'cause it had pressure building up...
Click to expand...