Bestival, a UK music festival with a "summer of love" meets renaissance fair vibe, has announced its moving over the Atlantic and embracing Toronto's already bulging music festival market June 12-13, one weekend after Field Trip returns to Fork York, one week before NXNE, and just over a month before Bonnaroo's offspring WayHome Festival launches its first year near Barrie. This is just getting ridiculous.

The line up for the Isle of Wight Festival's Toronto version is TBA, but the UK installation's September line up includes some interesting stuff amid the regular fare, from The Chemical Brothers to Dean Blunt. The festival told the New York Times they'll be building a temporary space on the island to hold up to 20,000 people daily.

Last year NXNE had a successful time running their own boats to and from Vice Island, and while All Caps is gone, Electric Island throws regular summer parties across the water - but this will be the largest event on Toronto Islands since Virgin Festival.

Tickets to the four day UK Fest aren't cheap (200 British pounds is nearly 400 Canadian dollars), but we'll have to wait and see how much gouging the promoters think they can get out of already festival saturated (see 2014's stacked summer) Ontario fans.
Click to expand...

can't wait for line up announcement.

If the chemical brothers are involved consider it done....

greginhali said:
If the chemical brothers are involved consider it done....
Click to expand...

Chemical Brothers won't be coming...they're playing a festival in Poland on the 12th.
UW are a possibility, maybe doing the Dubno album thing.( Rob Da Bank's tight with them too , and they're in LA on the 21st ).
Leftfield ? ( new material coming ).
Basement Jaxx live ?
Prodigy ?
T

Amongst the crowded UK festival schedule, Bestival has consistently been one of the best because it sets itself apart from the others.

While it certainly would be nice to have a headliner or two of the Underworld/Chemical Brothers/Prodigy stature, I don't think it'll be a disappointment if their isn't. Though I would certainly welcome Bassment Jaxx/Groove Armada/etc!

Underworld, Prodigy. Whoa. Would be a stellar line up.

Bassment Jaxx/Groove Armada are a nice runner up.
P

Embrace is the local promoter for it.

Hope they don't fuck this up and make it just another EDM fest du jour.

Somehow I think maybe the legacy electronic acts like Prodigy, Underworld, etc are a pipedream.
M

a few of my friends have been to bestival in the uk and said it was amazing. fucking dressing up box, wut? i'm curious to see the lineup - i am always pretty underwhelmed by most north american festival lineups, so fingers crossed. also, hopefully ticket prices aren't ridiculous. i'm intrigued and cautiously optimistic.

I'm placing a bet on Bjork being a headliner as she is playing the Governor's Ball Festival in NYC the week before..

I'm optimistic about the whole thing, but worried about the usual "Toronto Festival" problems like:

What are early curfews in Toronto? It's midnight in Calgary.

The lineup isnt great. But it's good enough for me. I like Nas, Flume, Owen Pallett, Skream, etc and I'm curious to hear new acts and new music that I haven't heard before.
S

I was considering going if i could get early birds, but seeing as they are sold out, it's a no go. The lineup isn't exciting enough for me to shell out $160+ after service fees and what not. I'm disappointed in the lineup, but also not surprised!
F

While I personally think its the best lineup released for any Toronto area festival thus far, I'm curious to know if there will be 1 day tickets available at some point? I'm surprised they are doing the event on the Friday and Saturday to begin instead of Saturday/Sunday.

edit: just found out Nas is on the Friday instead of Saturday, further reducing my interest in even a 1 day ticket, if they did end up offering them.
Last edited: Mar 4, 2015

Yeah the whole Friday / Sat thing rather than Sat / Sun is a bit of a pain in the ass.

I just took a vacation day from work for the Friday.
T

Jamie XX and Lane 8 on at the same time dislike. 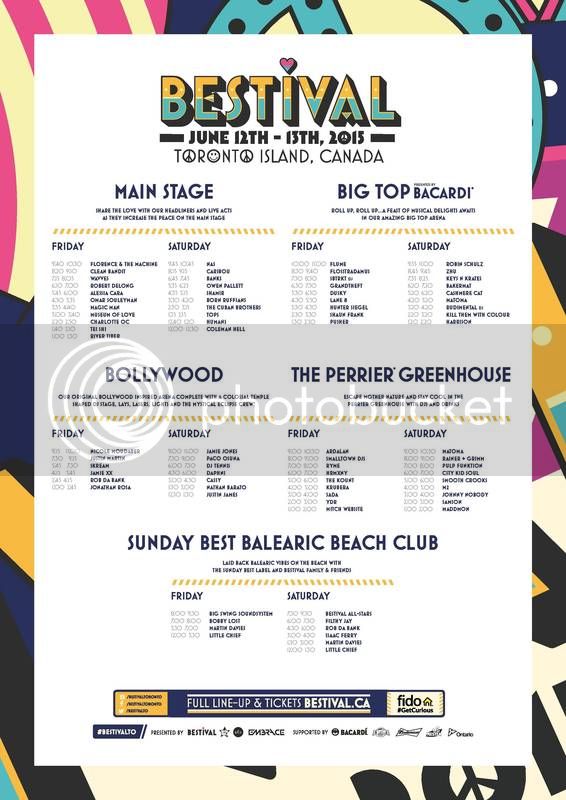 SneakyPete said:
Jamie XX and Lane 8 on at the same time dislike.
Click to expand...