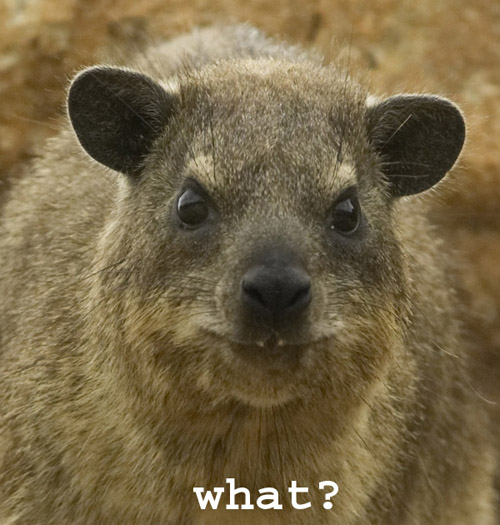 SOme dassie pictures I shot today.

They live on the rocks by the surf line just below the house. They are not rodents or ewoks but are more closely related to elephants. They are also called hyraxes.

The one above and below is the bull of the herd and is about the size of a large weinerdog.

They are vegetarians (hopefully). 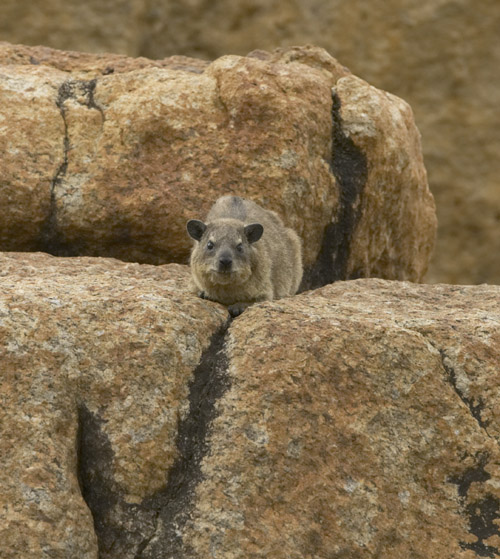 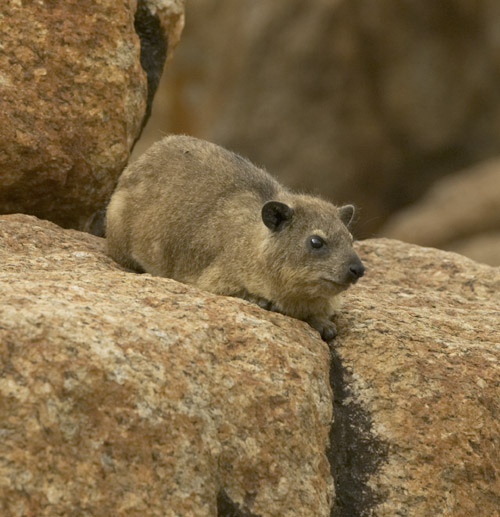 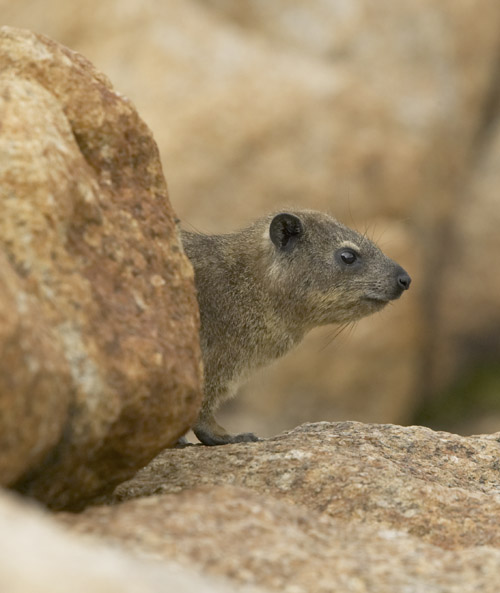 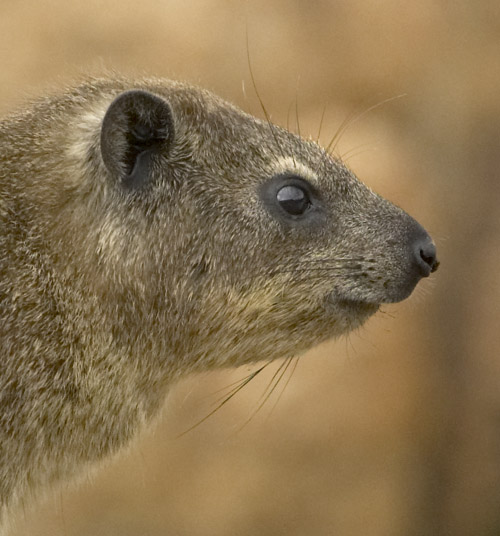 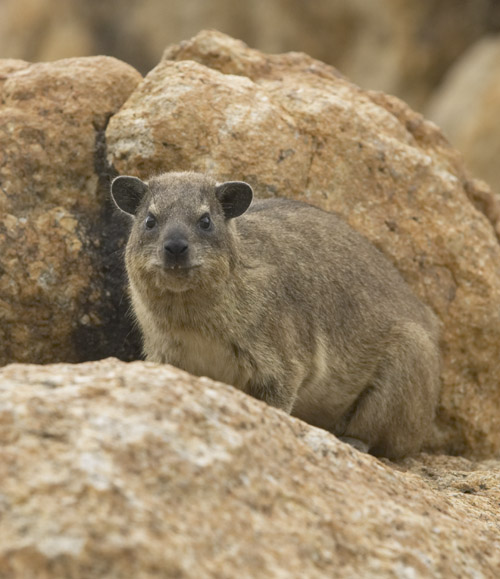 Staff member
^ he was guarding the herd. here are the babies: 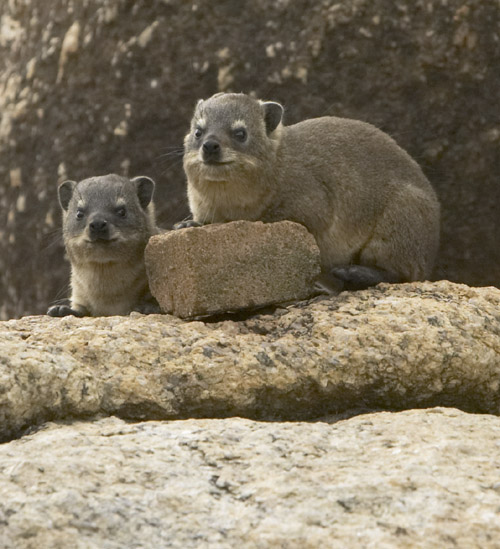 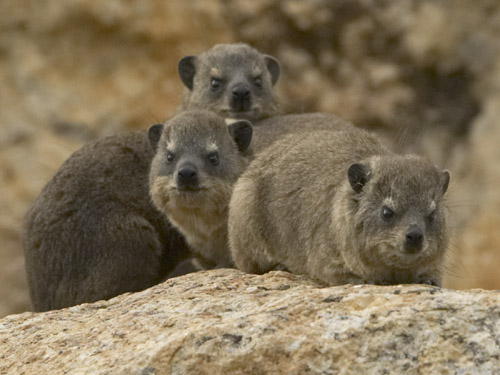 I love animals but. they. freak. me. out. They can attack big time, can't they? I can sense it!
E

No good can come from this thread

those look like a combination of every household pet (cat, dog, hamster, ferret, rabbit)
S

Yay! Those are awesome! and great pictures of them!

they've got evil looking eyes. they look pretty pissed off. especially in this picture:

That last pic looks like they'd be pretty quick to fuck you up if you came too close. Like they're saying "You trying to get crazy with me Ese?!?! Don't you know I'm Loco?!?!"

A small African mammal which looks like a rodent, but is actually a member of the Afrotheria - related to elephants, sea cows, tenrecs, elephant shrews and the aardvark.

Physical Description
A small, solidly built mammal superficially resembling a guinea-pig, with a short stump for a tail. Its feet have rubbery soles and sweat glands which help it grip and climb rocky surfaces. Part of the underside of the feet can be retracted, forming a suctioncap, giving the animal extra climbing abilities. The rock hyrax is covered in short, brown fur (paler on the underside), with occasional longer guard hairs which are touch sensitive. The ears are medium-sized and rounded, the nose black and leathery, and the eyes round and dark with a pale 'eyebrow'. All hyraxes have a gland on their back, and in the Cape hyrax this is dark brown.

Behaviour
Hyraxes have poor control over their body temperature, and instead use the sun's heat to regulate it, basking and huddling together. By being inactive and letting their body temperature drop they can conserve energy and live in places with poor quality vegetation. They live in groups of 3-7 related adult females with one adult male defending a territory encompassing theirs. Females do not defend their territories against other females, and home ranges may overlap. Males, however, are aggressive towards each other, particularly at mating time.

Reproduction
Females are sexually receptive about once a year, with births peaking during the rainy season after a gestation of 212-240 days. During the mating season, males' testes (which are internal, like those of other afrotheres) increase 20-fold in size, and they become very aggressive. Mating is brief but dramatic, with the male launching himself into the air with the effort. Within a group, females all give birth within a period of about 3 weeks to litters of 1-4. The young are born fully developed. Males without a territory live solitarily and attempt to mate with young females, who are often ignored by the territorial males. Young males leave their mothers at 16-24 months old as they reach sexual maturity. Young females usually stay with the group.

History
Hyraxes have a fascinating fossil history, having been the dominant herbivorous family in Africa whilst it was an island continent. There were large species, up to the size of tapirs, and even one aquatic species. When Africa collided into Europe, the hoofed animals of the north inveded, and hyraxes were pushed into their current niches.

i want to pet them, but at the same time, they look like members of cabinet.
S

Part of the underside of the feet can be retracted, forming a suctioncap, giving the animal extra climbing abilities.
Click to expand...

I would like to see this suction-cup ability practiced on human faces.

It would be like an evil hamster/camel spider super-creature that brings death and terror wherever it roams.
S

they have suction feet?!!?? that makes them practically SUPER HEROES!!
D

this could be a new mt. rushmore:

The non-tippie-toe ones taste better in stew.
S

Originally posted by daddyiwantchocolate
The non-tippie-toe ones taste better in stew.
Click to expand...

then again, this little tippy-toe one looks like in the next shot it would be getting run down by a Mac Truck.
D

No, no - it's ok. The non-tippietoe kind are kudu's and not only are they mean, but they're not nearly as cute as that little thing above.

I have a hat made of one.