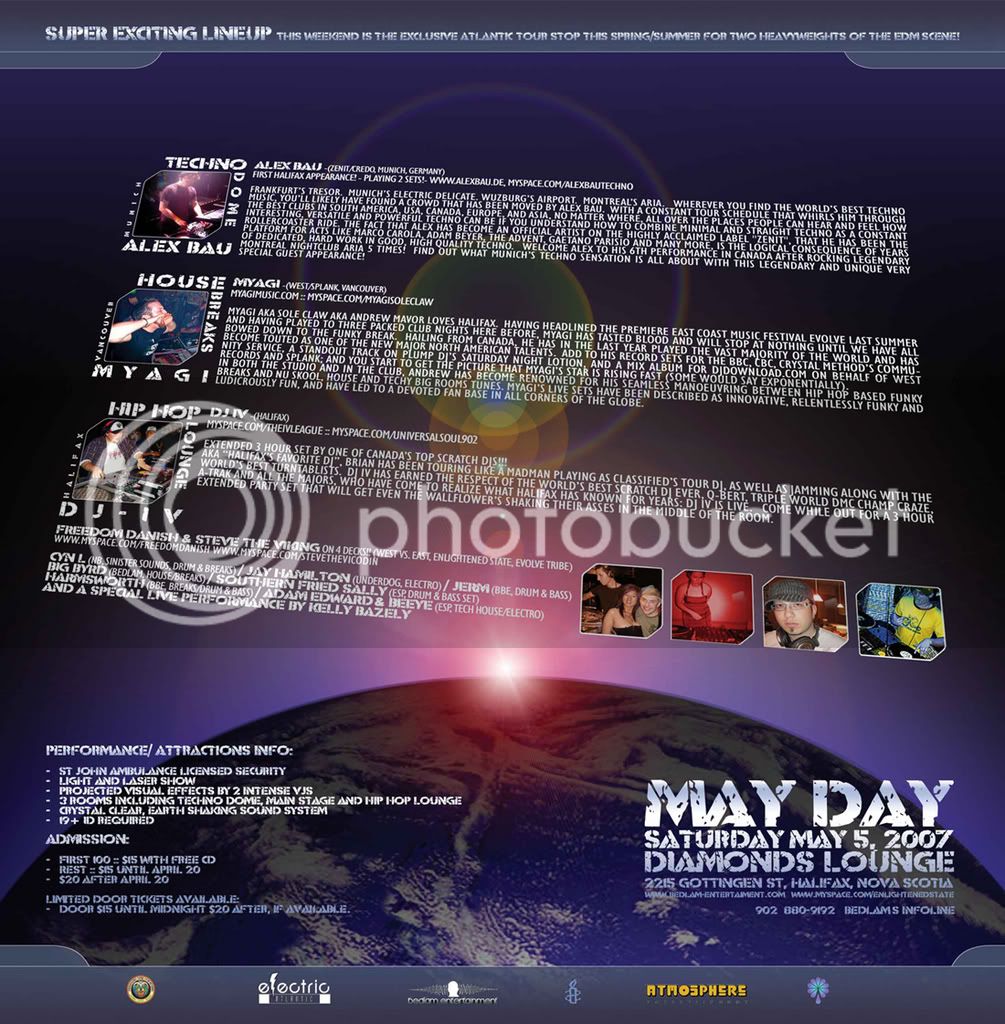 The exclusive Atlantic stop this spring/summer for two Heavyweights of the EDM scene!

Frankfurt’s Tresor. Munich’s Electric Delicate. Wuzburg’s Airport. Montreal’s ARIA. Wherever you find the world’s best techno music, you’ll likely have found a crowd that has been moved by Alex Bau. With a constant tour schedule that whirls him through the best clubs in South America, USA, Canada, Europe, and Asia, no matter where, all over the places people can hear and feel how interesting, versatile and powerful Techno can be if you understand how to combine minimal and straight techno as a constant rollercoaster ride. The fact that Alex has become an official artist on the highly acclaimed label "Zenit", that he has been the platform for acts like Marco Carola, Adam Beyer, The Advent, Gaetano Parisio and many more, is the logical consequence of years of dedicated, hard work in good, high quality Techno. Welcome Alex to his 6th performance in Canada after rocking legendary Montreal nightclub ARIA 5 times! Find out what Munich’s techno sensation is all about with this legendary and unique guest appearance!

*House/breaks*
Myagi (West/Splank, Vancouver)
FOR HIS ONLY ATLANTIC CANADA PERFORMANCE THIS SUMMER
Myagimusic.com :: Myspace.com/myagisoleclaw
Myagi aka Sole Claw aka Andrew Mavor has rapidly become a major part of North America’s contribution to electronic music. Hailing from Canada, he has in the last year played the vast majority of the world and has become touted as one of the new major North American talents. His releases and remixes are in constant demand. Myagi has remained fresh within the scene as a whole, pursuing something different, fusing many sounds into a high energy dance floor assault. He has played sets on the BBC, the CBC and Crystal Method's Community Service, landed a standout track on the Plump DJ's Saturday Night Lotion, and recently did an extremely well received exclusive mix album for DJ Magazines www.djdownload.com on behalf of labels West And Splank. In both the studio and in the club, Andrew has become renowned for his seamless manoeuvring between hip hop based funky breaks and nu skool, house and techy big rooms tunes. Myagi’s live sets have been described as innovative, relentlessly funky and ludicrously fun, and have led to a devoted fan base in all corners of the globe.

Extended 3 hour set by one of Canada’s top Scratch DJS!!! AKA “Halifax’s Favorite DJ”, Brian has been touring like a madman playing alongside the world’s best turntablists and holding his own. DJ IV has earned the respect of the world’s best scratch DJ ever, Q-Bert, Triple World DMC Champ Craze, A-Trak and all the majors, who have come to realize what Halifax has known for years: DJ IV is LIVE. Come while out for a 3 hour extended party set that will get even the wallflower’s shaking their asses in the middle of the room.

Boombastic gypsy peaceniks wrangle with a reincarnated Viking warrior to bring you a ridiculously fun and funky set full of unreleased specials, remixes and blow your mind choons that will keep you locked on the floor all night.

Cyn L
(Synister Sounds, BBE, Moncton) Every where a good party can be found, Cyn L is likely to be rocking out some nefarious drum and break beat grossness. A staple of the east coast scene both for her slamming party sets and legendary events, Cynthia will put the action into dance floor satisfaction.

Jay Hamilton
(Underdog Productions) A local legend will warm up the May Day Massive for German Techno Superstar Alex Bau. With his new double CD “The Pusher, The Pimp and The Panther” melting systems everywhere we couldn’t find a more suitable Canadian ambassador for Mr. Bau than electro-techno monster Jay Hamilton.

Big Byrd
(Bedlam, Underdog) There is a reason Big Byrd has been playing all the good shows lately, and it’s not just because he’s friendly. Whether opening for Dj Dan or closing down for Jr. Sanchez, Byrd is able to thrill crowds with his hard as nails techno or smooth as silk funky breaks.

Jerm
(BBE, Synister Sounds) Jerm is a notorious dance floor destroyer with too much wickedness for one island to contain; hence the PEI legend now calls mainland Nova Scotia his home. From within the walls of the BBE’s weekly, Break beats & Beer, Jerm’s drum and bass grimy bass lines have spread into the susceptible minds of our young, a growing massive of Atlantic Drum n Bassers forever turned off Country music.

Adam Edward & Beeye
(ESP Halifax) Closing the night in style will be two talented young DJs who have already demonstrated a top selection and tag mixing chemistry playing extended sets back to back for KP’s and Subrosa. Only the best electro house and techno from these two connoisseurs of musique.

Harmsworth
(BBE, Synister Sounds) With a weekly residency offering Halifax the only regular drum and bass/breaks party, as well as organising steady BBE collective shows and the dedication and skill to hold in to the finals in Reflections DJ Idol, Mark Harmsworth has got to be one of the hardest working DJs in Halifax. A hero to those who love their beats broken, Harmsworth will rinse out the roughest and the toughest of riddims in style.

And a special live performance by Kelly Bazely