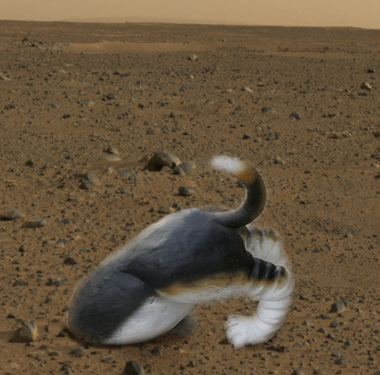 i was wondering when that thing would turn up. i guess it's a pretty big planet though, and they can't just send the current mars rovers on a hunt for the missing beagle.

even pop-star sound beacons weren't enough to save it.
S

Scientists wait to hear from the Beagle
By Melissa Eddy, AP
07 January 2004


European scientists anxiously awaited word from the Mars Express orbiter on its first attempt today to contact the Beagle 2 probe, which mission controllers haven't heard from since it landed on Mars last month.

Several previous attempts to pick up a signal from the probe since its scheduled Mars landing on Christmas Day have failed, both by NASA's Odyssey orbiter and powerful British and US radio telescopes.

European Space Agency scientists insist that Beagle 2's mothercraft, the Mars Express, provides the best chance of getting in touch with the 143lb probe because they were built to be compatible.

"Mars Express and Beagle 2 are the only systems tested end-to-end, giving ESA more confidence of establishing contact with the lander in the coming days," the agency said.

However, scientists acknowledge that the British-built Beagle 2 may have tumbled down a crater on the rocky Martian surface.

Mars Express is due to pass 195 miles above the site where the probe is believed to have landed. The window lasts until Saturday, after which the orbiter will move into a position less advantageous to making contact.

As the Europeans hoped to find their still-silent probe, their NASA colleagues were peering through the eyes of the Spirit rover, which landed over the weekend on Mars, and debating where to send it to take pictures.

Both the US and the European missions hope to search the Red Planet for possible signs of life.

While Beagle 2 is equipped with a mechanical arm to sample Martian soil and rocks, its mothercraft has a powerful radar to probe below the planet's surface for indications of water or ice that once may have sustained living organisms.