Astronomy Picture of the Day

This is a neat site to check up on and it gives Timo another chance to call us idiots. Yay! 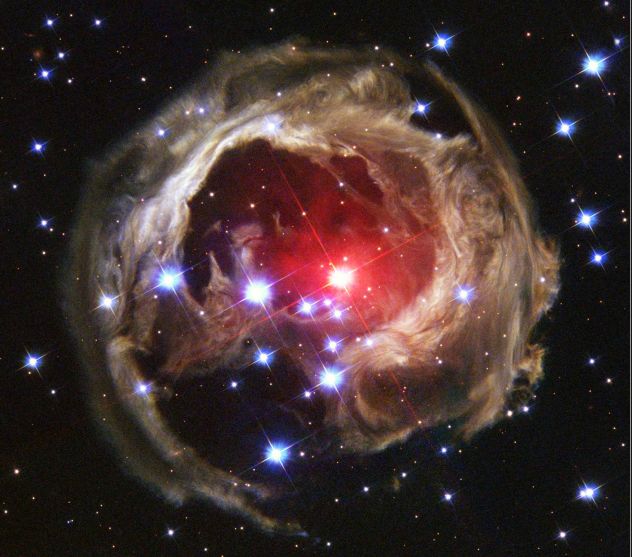 V838 Mon: Echoes from the Edge
Credit: NASA and the Hubble Heritage Team (AURA/STScI)
Explanation: Variable star V838 Monocerotis lies near the edge of our Milky Way Galaxy, about 20,000 light-years from the Sun. Still, ever since a sudden outburst was detected in January 2002, this enigmatic star has taken the center of an astronomical stage while researchers try to understand where it fits into the picture of stellar evolution. As light from the stellar flash echoes across pre-existing dust shells around V838 Mon, its appearance changes dramatically. Revealed in a sharp snapshot recorded in February by the Hubble's Advanced Camera for Surveys, this portion of the dust shell is about six light-years in diameter. But because light reflected from the dust follows only a slightly indirect path compared to the direct line-of-sight to the star, the light echoes visible now are only lagging about two years behind the outburst itself. Astronomers expect the expanding echoes to continue to light up the dusty environs of V838 Mon for at least the rest of the current decade.

I think it's real pretty! 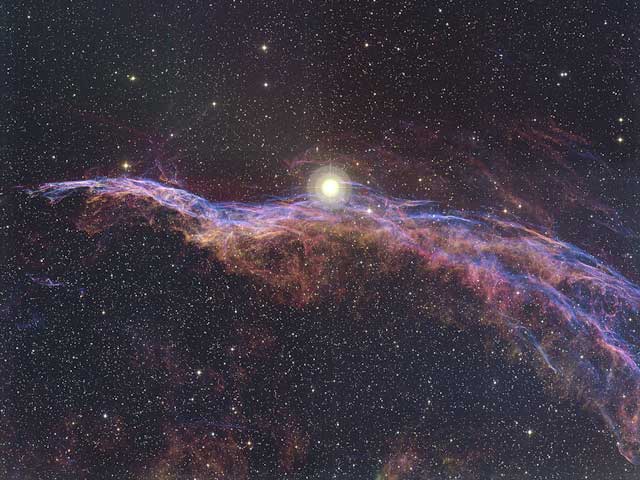 NGC 6960: The Witch's Broom Nebula
Credit & Copyright: T. A. Rector (U. Alaska), WIYN, NOAO, AURA, NSF
Explanation: Ten thousand years ago, before the dawn of recorded human history, a new light must suddenly have appeared in the night sky and faded after a few weeks. Today we know this light was an exploding star and record the colorful expanding cloud as the Veil Nebula. Pictured above is the west end of the Veil Nebula known technically as NGC 6960 but less formally as the Witch's Broom Nebula. The rampaging gas gains its colors by impacting and exciting existing nearby gas. The supernova remnant lies about 1400 light-years away towards the constellation of Cygnus. This Witch's Broom actually spans over three times the angular size of the full Moon. The bright star 52 Cygnus is visible with the unaided eye from a dark location but unrelated to the ancient supernova. 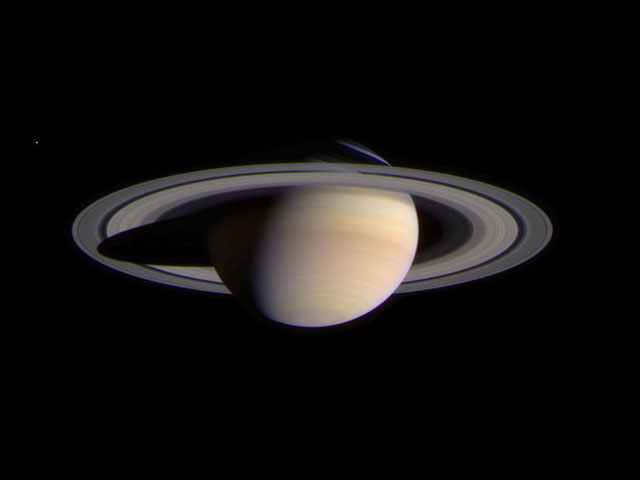 Cassini Closes in on Saturn
Credit: Cassini Imaging Team, SSI, JPL, ESA, NASA
Explanation: Are they gone? They were not originally predicted to even be there. The mystery revolves around strange shadow-like spokes that appeared on Saturn's large B-ring, the large middle ring in the complex system of particles that orbits Saturn. The spokes were discovered 23 years ago by the passing Voyager spacecraft and attributed to very fine dust of unknown origin. The missing spokes were noted in the above image, taken last month, from the robot Cassini spacecraft now approaching Saturn. Launched in 1997, the distance remaining between Cassini and Saturn is now less than half that between the Earth and the Sun. Cassini is expected to enter orbit around the ringed Jovian giant planet in July and drop a probe onto Titan, Saturn's largest moon.

This one doesn't even look real!
P

I don't think any of those look real.

Quite beautiful though.
E 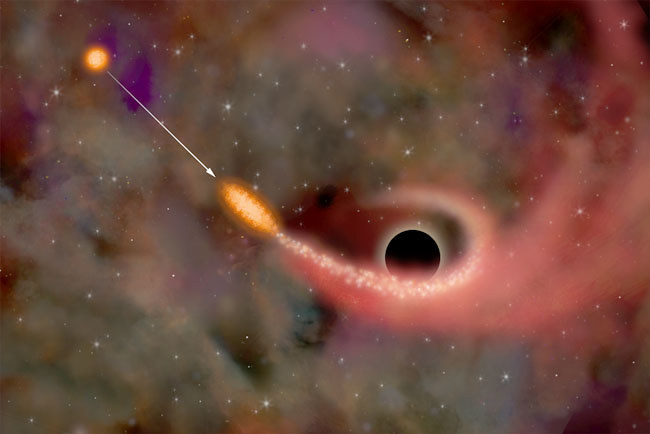 X-Rays Indicate Star Ripped Up by Black Hole
Illustration Credit: M. Weiss, CXC, NASA
Explanation: What could rip a star apart? A black hole. Giant black holes in just the right mass range would pull on the front of a closely passing star much more strongly than on the back. Such a strong tidal force would stretch out a star and likely cause some of the star's gasses to fall into the black hole. The infalling gas has been predicted to emit just the same blast of X-rays that have recently been seen in the center of galaxy RX J1242-11. Above, an artist's illustration depicts the sequence of destruction (assuming that image-distorting gravitational-lens effects of the black hole are somehow turned off). Most of the stellar remains would be flung out into the galaxy. Such events are rare, occurring perhaps only one in 10,000 years for typical black holes at the center of typical galaxies.

So the black hole gets feisty and rips a piece off a star. That's awesome!

check out the goat.se nebula
C

whatever, they're airbrushed,
peace
K

shows the 8 month period of the V838 monocheros

Originally posted by mr tall
check out the goat.se nebula
Click to expand...

Bend over and let me see it!
E 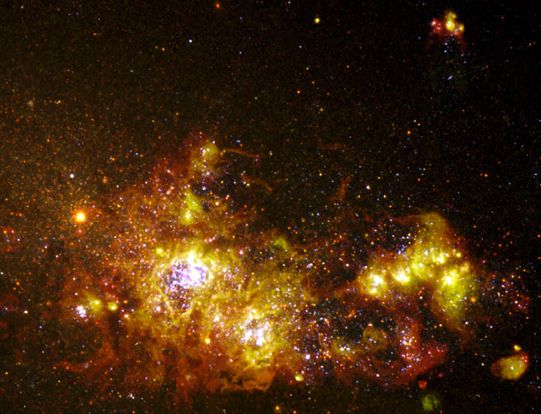 This is very nice looking piece of property and is close by, being a mere 13 million miles away.

The archive goes back eight years. The quality of the pictures has greatly improved through the years.

The Eskimo Nebula from the Newly Fixed Hubble
Credit: Andrew Fruchter (STScI) et al., WFPC2, HST, NASA
Explanation: In 1787, astronomer William Herschel discovered the Eskimo Nebula. From the ground, NGC 2392 resembles a person's head surrounded by a parka hood. In 2000, just after being fixed, the Hubble Space Telescope imaged the Eskimo Nebula. From space, the nebula displays gas clouds so complex they are not fully understood. The Eskimo Nebula is clearly a planetary nebula, and the gas seen above composed the outer layers of a Sun-like star only 10,000 years ago. The inner filaments visible above are being ejected by strong wind of particles from the central star. The outer disk contains unusual light-year long orange filaments. The Eskimo Nebula lies about 5000 light-years away and is visible with a small telescope in the constellation of Gemini.

Go Hubble. To bad their going to let it break down.
K 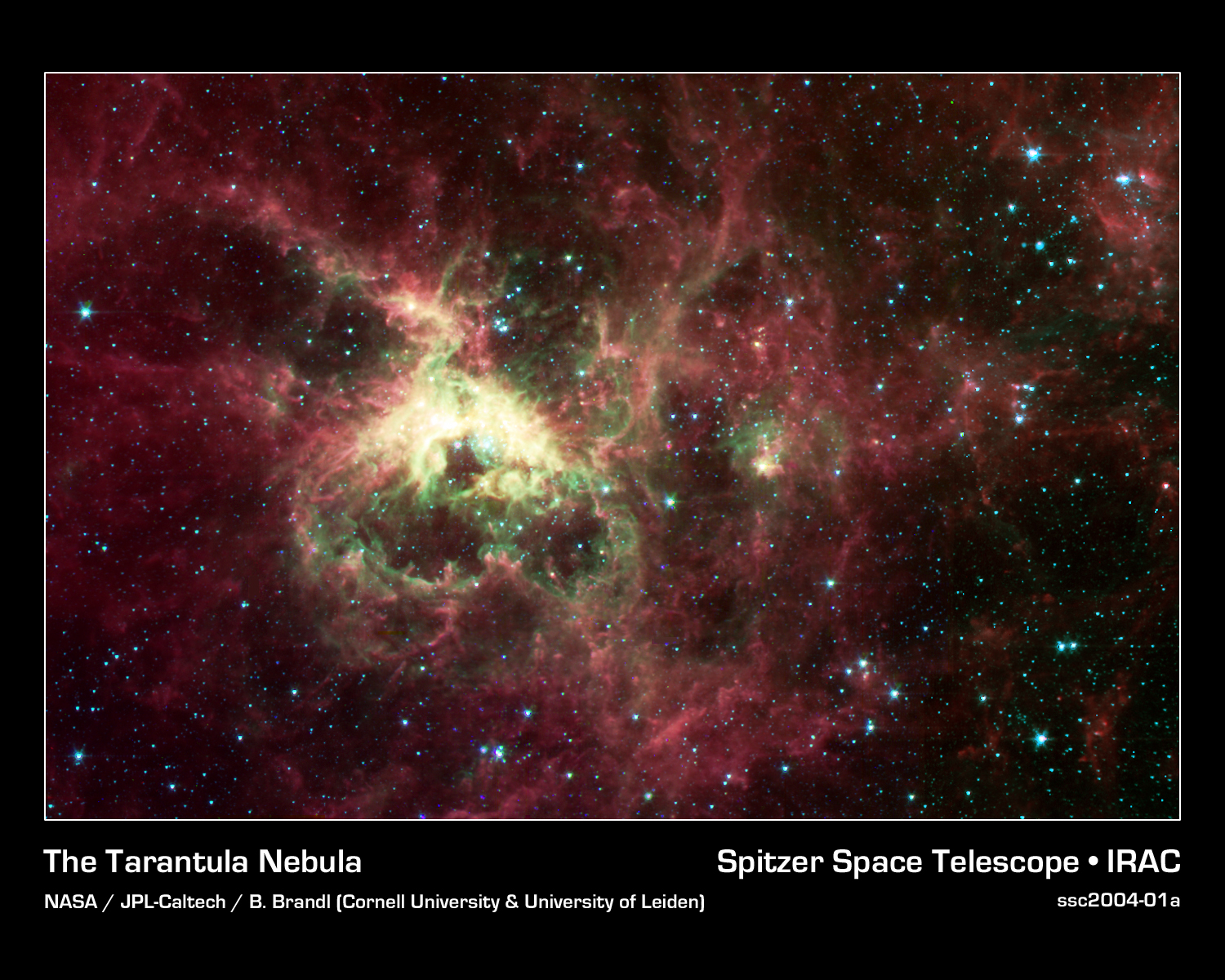 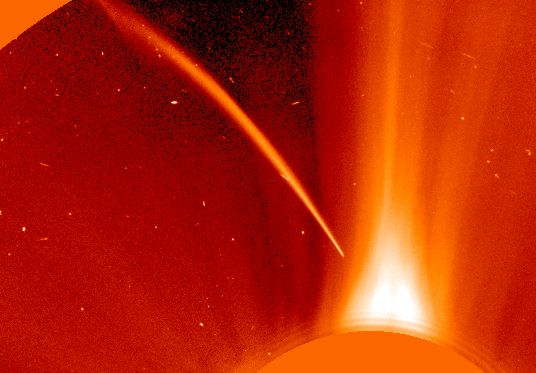 Sungrazer
Credit: LASCO, SOHO Consortium, NRL, ESA, NASA
Explanation: Arcing toward a fiery fate, this Sungrazer comet was recorded by the SOHO spacecraft's Large Angle Spectrometric COronagraph (LASCO) on Dec. 23rd, 1996. LASCO uses an occulting disk, partially visible at the lower right, to block out the otherwise overwhelming solar disk allowing it to image the inner 5 million miles of the relatively faint corona. The comet is seen as its coma enters the bright equatorial solar wind region (oriented vertically). Spots and blemishes on the image are background stars and camera streaks caused by charged particles. Positioned in space to continuously observe the Sun, SOHO has detected 7 sungrazing comets. Based on their orbits, they are believed to belong to a family of comets created by successive break ups from a single large parent comet which passed very near the sun in the twelfth century. The bright comet of 1965, Ikeya-Seki, was also a member of the Sungrazer family, coming within about 400,000 miles of the Sun's surface. Passing so close to the Sun, Sungrazers are subjected to destructive tidal forces along with intense solar heat. This comet, known as SOHO 6, did not survive. 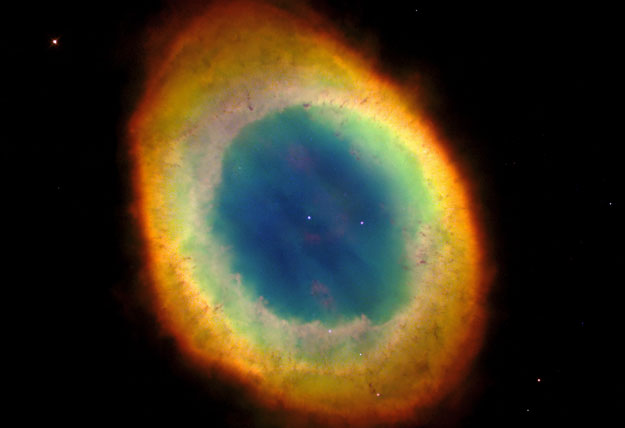 M57: The Ring Nebula
Credit: H. Bond et al., Hubble Heritage Team (STScI /AURA), NASA
Explanation: Except for the rings of Saturn, The Ring Nebula (M57) is probably the most famous celestial band. This planetary nebula's simple, graceful appearance is thought to be due to perspective -- our view from planet Earth looking straight into what is actually a barrel-shaped cloud of gas shrugged off by a dying central star. Astronomers of the Hubble Heritage Project produced this strikingly sharp image from Hubble Space Telescope observations using natural appearing colors to indicate the temperature of the stellar gas shroud. Hot blue gas near the energizing central star gives way to progressively cooler green and yellow gas at greater distances with the coolest red gas along the outer boundary. Dark, elongated structures can also be seen near the nebula's edge. The Ring Nebula is about one light-year across and 2,000 light-years away in the northern constellation Lyra.

Itz teh Eye of Sauron! Run! 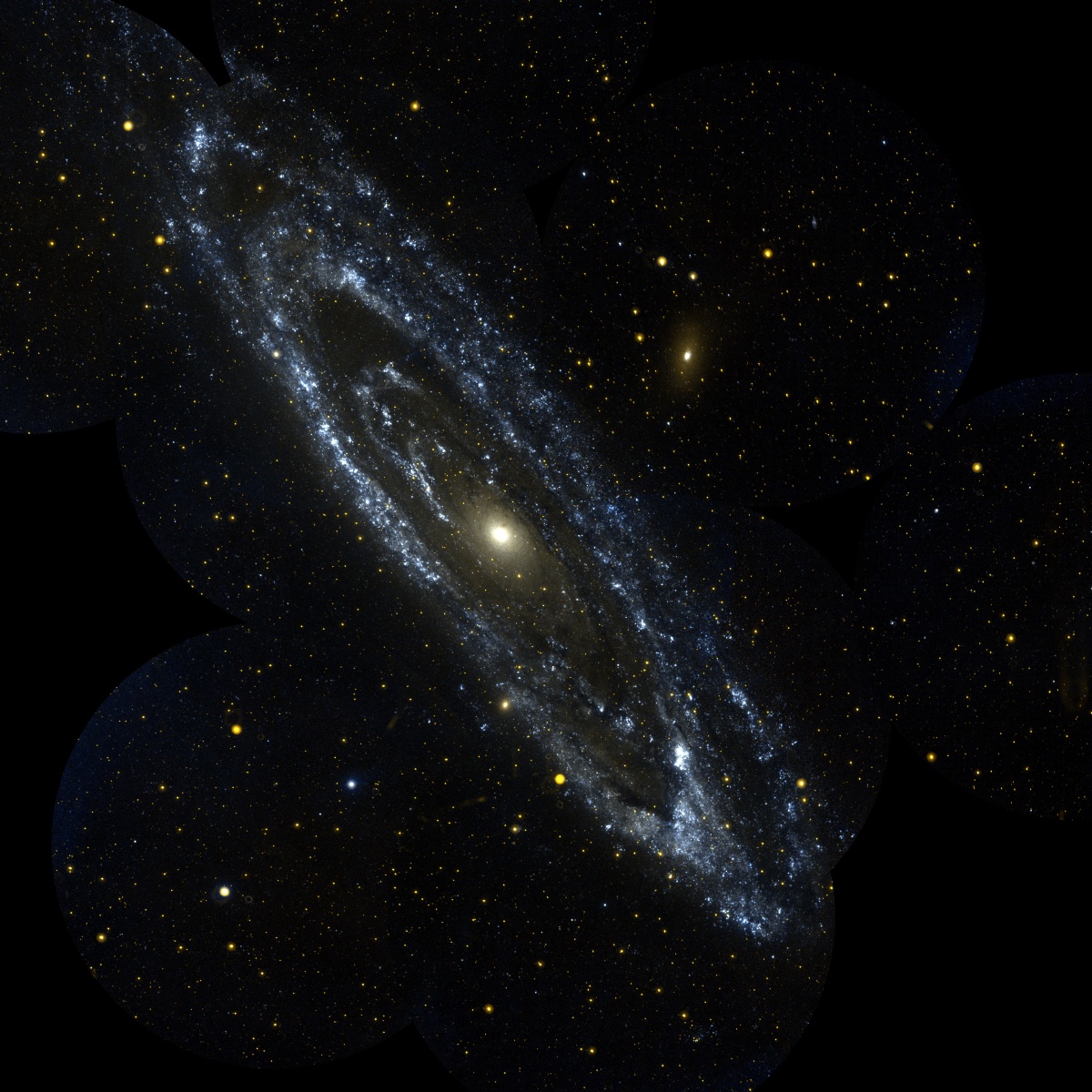 andromeda galaxy (galaxy closest to ours) with ultra-violet colours
P

Originally posted by PRIMAL
I don't think any of those look real.

They aren't "real" in that they are false colour, i.e. different radiation wavelengths are assigned visible colours by algorithms which are chosen to give the most pretty colours to us humans.

And they've been getting better over the years because computers are more powerful, and better at filling in the blanks.
D

Originally posted by Evil Dynovac
[B Astronomers of the Hubble Heritage Project produced this strikingly sharp image from Hubble Space Telescope observations using natural appearing colors to indicate the temperature of the stellar gas shroud. Hot blue gas near the energizing central star gives way to progressively cooler green and yellow gas at greater distances with the coolest red gas along the outer boundary.
[/B]
Click to expand...

One of the biggest disapointments of my life was to find out that pictures of nebulae were actually colour enhanced and not naturally like that. I thought the universe was colourful and vibrant. Turns out it's mostly just black and white.

Finding out about Santa Clause wasn't that hard. 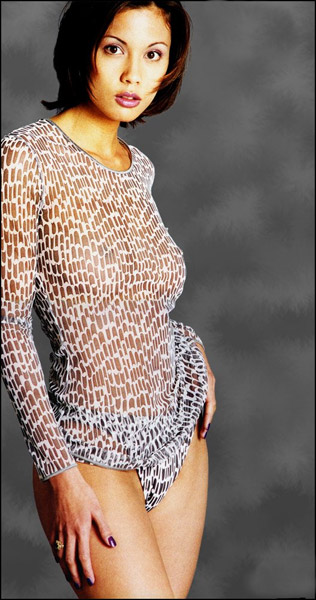 Originally posted by Casper
whatever, they're airbrushed,
peace
Click to expand...

This is what happens when I blow my load.
T

I wanna see a picture of the new galaxy

Originally posted by Dr Funk MD
One of the biggest disapointments of my life was to find out that pictures of nebulae were actually colour enhanced and not naturally like that. I thought the universe was colourful and vibrant. Turns out it's mostly just black and white.
Click to expand...

Actually, no. They use colour enhancement, because most of the pictures are in electromagnetic wavelengths invisible to the human eye. If our eyes weren't so limited, we'd see the universe is much, much more than just black and white.
You must log in or register to reply here.
Share:
Twitter Reddit Pinterest Tumblr WhatsApp Email Share Link
Top