"Today, my bike was stolen.
Or at least I thought it was stolen. After a 90-minute client meeting at Yonge/Bloor, my bike had disappeared from this pole outside the Hudson's Bay Centre. I walked up and down the sidewalk for several minutes, not accepting that this was really happening.

I was about to head home and have a good bawl -- I can't afford a new bike -- when I noticed a security camera on the RBC that would have captured the bike thief. So I approached a security guard standing outside the Centre and explained my situation. "Yeah, I cut some bikes in the last hour and a half," he said. "That's private property," he said, and told me that the building owner -- Brookfield Office Properties -- orders their security staff to remove bikes from the pole. Since when is the SIDEWALK private property? I told him he needed to give me my bike back right now or I'd call the police to report a bike theft. While waiting in the lobby for my bike, the security guard on duty there commiserated with me, saying, "Yeah, we get several angry cyclists in here a day."

And those are just the ones who figured out what really happened! I wonder how many people have just assumed their bike was stolen by some run-of-the-mill bike thief and gone home and cried like I was about to? I mean, who would guess that a company worth $18.7 billion steals bikes from low-income people? What does this $18.7 billion company do with all the bikes they steal -- do they actually sell them? Sickening.

Staff member
Is that sidewalk public property I wonder...
R

I totally recognize that guard in the picture from somewhere.

Should have reported the bike theft anyway. The cyclist now needs a new lock at the very least.
S

alexd said:
Is that sidewalk public property I wonder...
Click to expand...

This is the key question, is it not?

I worked at Yonge/Church for 15 years. I know that pole very well. Wasn't it the city that paid for the 'beautification' of the sidewalks there?
Or maybe the sidewalk is public, but the pole itself is considered private?
Last edited: Aug 14, 2014

This is going to get a lot of media coverage.

SmoothOperator said:
This is going to get a lot of media coverage.
Click to expand...

With the news source being tribe again?
P

Actually, the same thing was happening here on the Plateau Montreal a few months back, only the culprits weren't some private business, but the actual city-council Borough of Plateau Mont-Royal. Actually, they went around and removed perfectly valid bikes (not just detritus-debris bikes), from *city property* signposts, claiming there's an actual bylaw against persons locking anything to *public property* (outside of designated bike posts).

(There is this bylaw, but obviously it's never ever enforced, unless the City is looking for a quick bike ticket cash grab, which they were, apparently).

Anyways, CBC Montreal got wind of this, and did a big story, which of course sparked outrage amongst bikers and other environmentally concerned residents, and when the City Counciller designate was interviewed, stating these *bylaw facts*, he and the city were quickly compared to crackhead bike thieves, and so they not-so apologized and stopped stealing resident's bikes.

Staff member
I added a pole to this thread.
S

Someone just didn't like seeing the bikes "I want those eyesores out of here!"

Probably same people that complain if the wrong type of car ends up parking in front of their yard when a neighbour has a party.
A

So retarded. They're bikes not dead corpses.

I don't understand how this is legal, I keep seeing a citytv reporting trying to contact Sarah.

Hopefully, this will become a big story.
S

what's with the pole poll?
S

djfear said:
Should have reported the bike theft anyway. The cyclist now needs a new lock at the very least.
Click to expand...

The owner of the bike is being offered a new lock. This is also being dealt with in some degree.

LOL, this thread was just asking for a pole about the pole!

alexd said:
LOL, this thread was just asking for a pole about the pole!
Click to expand...

3rd option: "Would you strip on this pole?"

djfear said:
With the news source being tribe again?
Click to expand...

Using a few City plans I have access to for that area it appears the property line is about 6m off of the curb line. Which when eyeballing the pole from streetview looks like the pole could be just inside private property.

I'd also like to know what kind of tool they're using to cut the locks.

This Kryptonite locks pride themselves on being extremely hard to cut.
C

coleridge said:
Using a few City plans I have access to for that area it appears the property line is about 6m off of the curb line. Which when eyeballing the pole from streetview looks like the pole could be just inside private property.
Click to expand...

According to Official Record of Highways, the #TTC sign and bikes are on the City's right of way. #bikeTO #BloorYonge 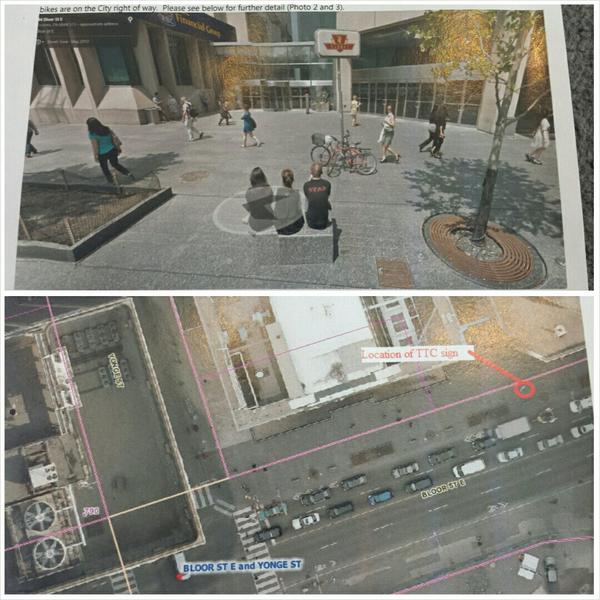 I am not sure Brookfield would want to claim that area as private property. If somebody slip and fall there they now know who to sue.

Here's an unrelated thought that I have:

I don't like it when people lock up their bicycles in the distillery district, specifically in places that aren't designated bicycle lock rings. I feel it's very much a walking part of town and the locked up bicycles detract from the appeal of the area.