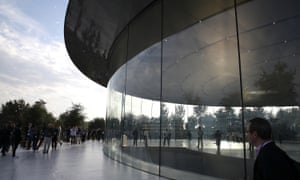 Despite warnings from a building inspector that people would not be able to tell where the door ends and the wall begins, at least three Apple employees walked or ran into the ultra-transparent glass hard enough to require emergency medical treatment during the first month of occupation, according to recordings of 911 calls obtained by the San Francisco Chronicle.

Apple Park is a gigantic, $5bn (£3.6bn) four-storey glass and metal circle building designed by Norman Foster, where the glass has been specially treated to achieve an exact level of transparency and whiteness. The doorways reportedly have perfectly flat thresholds because “if engineers had to adjust their gait when entering the building, they risked distraction from their work”, according to a construction manager talking to Reuters. It also uses the largest, heaviest single pieces of glass ever installed on a building that also happens to be curved.

Apple co-founder Steve Jobs once said: “There’s not a straight piece of glass on this building” and that this was “a shot at building the best office building in the world”.

Employees have reportedly been dealing with the problem since Apple Park first opened in a limited capacity last year. According to Bloomberg, distracted workers on their iPhones have been walking into glass walls around office spaces, resorting to sticking yellow sticky notes on the glass doors to help. The notes were reportedly removed, however, because they detracted from the building’s design.

Instead, Apple has reportedly had to resort to putting rectangular stickers on some of the glass to try and avoid further injuries, having started with the doors. Apple uses similar stickers in some of its glass-doored stores.

Birds flying into large panes of glass is a fairly common hazard, but people doing the same in an office is not. In January, Apple’s vice president of real estate and development, Dan Whisenhunt, reportedly acknowledged the problem to the Rotary Club of Cupertino. He said: “We’ve had people bump into the glass. That’s a problem we are working on right now.”

Apple did not immediately reply to a request for comment.
Three Apple workers hurt walking into glass walls in first month at $5bn HQ