Anyone else find it a little odd...

That washington DC has an Owl built into it's most important buildings? Ahem, Molech... 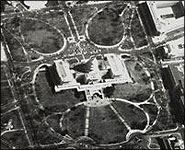 Or that it's standing on a pyramid with the top cut off?

How about The fact that the rest of the buildings make a pentagram?

Don't go look up Bohemian grove if you're easily scared...

...but it's all conspiracy theory anyway, nothing to worry about...

I once counted the number of flopeters (a unit of measurement I patented) it took to bisect the great pyramids, and discovered it was precisely equal to the number of words in Revelations (King James ver, 4th ed), which was ALSO a PERFECT divisor into the number of kilometers between the tip of the pyramid and the apex of the supposed orbit of the 10th planet encircling the solar system.

O shit! You're totally right man! The buildings aren't laid out like that, I was just hallucinating from being a hippie and eating too much granola!

he doesn't have dreadlocks

hi dylan
i would find it interesting, but conspiracy theories are too complicated for me to follow most times

too much x-files when i was younger

OK, I'll give you the abridged version.

The Freemasons designed the street layout for Washington, and for reasons that I won't get into now they place extreme importance on geometrical figures such as the pentagram, the tree of life from the qabbalah, pyramids, obelisks, domes, and various other ancient symbols like the owl (aka moloch, form the bible), the sun, the zodiac, etc.

The Freemasons are arguably a manifestation of another, more ancient secret society that continuously changes names over history but can always be recognized by it's obsession with symbols. The city layouts of Paris and London also reflect this obsession and it's damn creepy.
P

I find patterns in license plates of cars... I like to complicate things, since it keeps my brain active, but man alive, get off the city shit... of course there will be patterns, and especially concentric ones from the CENTRE of any city...
O

Masonry=devil worship is largely an idea perpetuated by the Christian church as they found it very threatening that part of it's patronage began to join of 'The Lodge' which it saw as a temple of false idols (realistically a competing fellowship that it looked to quash) so it spread the various devilish rumors that still exist today. Masonry began as a type of organization that looked to assist it's members in a time of limited stability in governmental organization -a brotherhood to trancend all the political and religious wishwash for the sake of reliability -a friendly face in every town, villiage and city which would otherwise be full of unwelcoming strangers and antagonism towards differences. It's only logical, as with every theistic and semi-theistic organization, that from time to time a powerful few abuse it's infastructure for devious & underhanded conduct (which fuel the various popular consiracy theories) as opposed to the other way around -that it was indeed created to perpetuate a secretive world order.
A

Originally posted by DaPhatConductor
O shit! You're totally right man! The buildings aren't laid out like that, I was just hallucinating from being a hippie and eating too much granola!

Thank you o great dispellor of illusions!
Click to expand...

Easy there, bucko, I was just playing out the hyperbole a bit.
D

Originally posted by DaPhatConductor
OK, I'll give you the abridged version.

The Freemasons designed the street layout for Washington, and for reasons that I won't get into now they place extreme importance on geometrical figures such as the pentagram, the tree of life from the qabbalah, pyramids, obelisks, domes, and various other ancient symbols like the owl (aka moloch, form the bible), the sun, the zodiac, etc.

The Freemasons are arguably a manifestation of another, more ancient secret society that continuously changes names over history but can always be recognized by it's obsession with symbols. The city layouts of Paris and London also reflect this obsession and it's damn creepy.
Click to expand...

the freemasons were an offshoot of the knights templar (who may have discover gnostic scrolls under the temple mound). it's not the pentagram that interests them it's a square (the measuring tool), and a compass that gives the illusion of a pentagram. some of the rituals they practice (which most masons do not know the significance of) are derived from the eygptian king making rituals. they place great belief in the pillars of jachin & boaz (which can also be found in hebrew tradition as two pillars connects shalom).

Originally posted by ~atp~
Easy there, bucko, I was just playing out the hyperbole a bit.
Click to expand...

It's arguable that there are thousands or even millions of towns around the world that bear the same geometric configuration, not because they were all created by freemasons, but because most cities are designed with a geometric grid, and city centers are designed to appear as a the center of a city, with symmetry and unique geometric configurations. If you can prove the above configuration is uniqie only to that city, and not just from a map with some lines drawn on it, you may have an arguable point. But I can already tell that I could draw a million different geometric shapes on that map and call it something conspired.

I'd be more concerned with skull & bones than Freemasonry or Knights of the Templar as one skull member currently holds the whitehouse, and another is making a bid to take it over. Considering their membership list is only about 800 people long, I'd say that's quite a feat that cannot be attibuted to chance.

I was trying to simplify We all know it gets a lot more complicated than one or two secret societies, especially when you consider the relationships between them.

I am well aware that many cities contain geometric arrangements but what I think you're missing is that there are streets under those lines on the map, and that the owl one is just a photograph with no lines drawn on it. In the case of Washington DC the geometric figures and owl depiction are painfully obvious, especially when one takes into account the symbolism depicted on the buildings all ties in with the figures.

I think we can all agree that the influence of secret societies is very extensive, that the symbols depicted on the buildings and in the streets of many of our major cities are the same as those used y these secret societies, and that it's damn creepy...
O

Check this out... something I drew up in a few seconds..

Not trying to undermine what you say, but the case is inherently weak.
A

Originally posted by OTIS
Check this out... something I drew up in a few seconds..

Not trying to undermine what you say, but the case is inherently weak.
Click to expand...

It's upside-down, you need to make the star match the inner pentagram.

It seems so crazy, that whenever this shit gets brought up, people just shrug it off.

But there really is a secret society called the Skull & Bones which has it's homebase in a windowless building located at Oxford called the Tomb(this is an undeniable fact). All it's members are sworn to sercrecy, but from what info has been able to reach the public, it is known that a Skull and Bones member must look out for other members and help advance them along in society whenever possible.
George W. is a member of Skull & Bones(undisputable fact). If you wanna' do a Google search, you'd find a large majority of Presidents, and top CEOs of the biggest companys are Skull & Bones. Certainly a higher percentage than the the ratio of Skull & Bones members to the rest of the population. Whether you believe this organization is nefarious or not, the fact is they have an INCREDIBLE INFLUENCE on the world.

And yes, The Pentagon's vertices do form a pentagram, so how does this disprove the Phat Conductor's point? If anything, it only makes the point stronger. This is the centre of the USA's military power, and if you were to look at all the Joint Chiefs of Staff, all the leader's of the army in America's history, you would find an unusually high percentage were Skull & Bones.

It's hard to believe, this is what keeps this issue from ever being properly explored in the 'respectable' media. This and the fact that the society members are sworn to secrecy, AND that many of the people with power and influence in the media are also Skull & Bones.

Actually that pentagon thing is really funny because if you look at any washington DC street map you will find that it is in direct proportion and cardinal point alignment to match the pentagram that the whitehouse is at the bottom point of. It also lines up with geomentrical figures that are built into the streets of washington. You don't have to draw any lines on any maps, they're already there in the streets. It's not like these lines are strange connections of random buildings that kind of line up, THEY"RE BUILT INTO THE STREETS AND BLATANTLY IN YOUR FACE.

I'd also like to take this opportunity to point out that at Queen and University that big promenade that starts at Queen's Park ends with an obelisk with a evil reptilian humanoid thing perched on the top. The obelisk and ruling reptilians are also classic Skull + Bones/Freemason/illuminati/whatever-you-want-to-call-them symbols.

Poeple need to stop taking these symbols literally and start looking at what they actually mean, and to whom...

Oh yeah, and that temple at the top, above the pentagram and in direct alignment with the whitehouse is a Freemasonic temple. We have one here in toronto too, there have been tons of raves there and it currently h ouses CTV. Which is totally unsurprising seeing as the Freemasons/Skull + Bones totally run tings in the media.

Go look up the Bildeburg group, it's a Freemasonic interest group composed of the uber-elite that Conrad Black is a member of, along with Tony Blair, Lord Carrington, and a whole shitload of other dirty bastards.

Kind of makes you wonder if the naysayers might be members of these secret groups, no?

I hope that by writing this nothing untoward happ
O

Go look up the Bildeburg group, it's a Freemasonic interest group composed of the uber-elite that Conrad Black is a member of, along with Tony Blair, Lord Carrington, and a whole shitload of other dirty bastards.
Click to expand...

I have, in fact I have their participants & agenda list from 98 and on (if you want them PM me). However, given your interest, you should concentrate on more direct and tenable ways of bringing enlightenment, cuz sadly it's very easy to alienate yourself with this connecting the dots tinfoil hat style theory.
D

I know this isn't the best way to 'enlighten' the masses, this IS my recreational internet funtime after all i just post this stuff for shits and giggles, as scary as it is.

i don't really care what people think, i enjoy it
O

Yea same here, that's why I have a huge Art Bell archive. it's earcandy to fathom some of the shit that gets presented there. However, you did take slight offense to someone poking fun at it, so I just thought you presented it with a legitimate attempt to start some serious discussion.
D

naw, cain't none o u motherfuckers offend me!