just saw this on CNN, and i'm so fucking angry about it.

they had footage of the poor family of a dead soldier trying to get these god warriors to let them mourn in peace - instead the fucking fascists just keep screaming.

CHICAGO -- At least five Midwestern states are considering legislation to ban protests at funerals in response to demonstrations by the Rev. Fred Phelps and members of his Topeka, Kan.-based Westboro Baptist Church, who have been protesting at funerals of Iraq war casualties because they say the deaths are God's punishment for U.S. tolerance toward gays.

Though the soldiers were not gay, the protesters say the deaths, as well as Hurricane Katrina, recent mining disasters and other tragedies are God's signs of displeasure. They also protested at the memorial service for the 12 West Virginia miners who died in the Sago Mine.

Best of the Post: Nation
The best photographs taken throughout the nation by Washington Post photographers in 2005.

Who's Blogging?
Read what bloggers are saying about this article.
Mikhaela's News Blog
Richard G. White
Norlos.com ?? Don't Mess with the Sock Monkey


Most Blogged About Articles
On washingtonpost.com | On the web

"The families weren't able to bury their loved ones in peace," said Kansas state Sen. Jean Schodorf, who has proposed legislation. "We felt pretty strongly that we needed to do something about it."

Kansas already has a law banning demonstrations at funerals, but Schodorf said the existing law is vague and hard to enforce. The proposed bill would keep protesters 300 feet away from any funeral or memorial service and ban demonstrations within one hour before or two hours after a service.

Legislators in Illinois, Indiana, Missouri and Oklahoma are looking at similar bills. Proposed legislation in Indiana would keep protesters 500 feet from funerals, and make a violation a felony punishable by a three-year prison term and a $10,000 fine.

State Sen. Anita Bowser said she thinks the demonstrators are hoping to provoke a physical attack so they can file a lawsuit.

"These people are not gainfully employed, so they're waiting for someone to do battle with them so they can go to court and win," said Bowser. "They want a big liability case to pursue. I don't think they actually give a diddly wink about the arguments they're making, but they're clever individuals trying to make a fast buck."

Shirley Phelps-Roper, Phelps's daughter and an attorney for the church, said if legislation passes, the group will challenge it in court. "Whatever they do would be unconstitutional," she said. "These aren't private funerals; these are patriotic pep rallies. Our goal is to call America an abomination, to help the nation connect the dots. You turn this nation over to the fags and our soldiers come home in body bags."

A motorcycle group called the Patriot Guard, made up mostly of veterans, has started attending funerals to act as a buffer between the protesters and family members.

"They'll chant and make snide remarks, they have all these signs that say 'Thank God for dead soldiers,' 'Thank God for body bags,' " said Patriot Guard member Rich "Stretch" Strothman, a Wichita resident. "They'll throw the flag on the floor and wipe their feet on it. . . . We go under request from the families, we're not counter-protesters."

Ed Yohnka, communications director of the American Civil Liberties Union of Illinois, said the bills are troubling from a free speech perspective. "We have some concerns about the vagueness of the language," Yohnka said about the proposed Illinois bill. ". . . One of the things that concerns us very much is the degree to which the bill blocks access to people engaged in political expression on public sidewalks. We think a 300-foot bubble is excessive."

Phelps runs this organization with his giant family of hick lawyers.
They even teach their children to be hateful. It's really disgusting.

THESE FUCKERS ARE GOING DOWN.

I'm sure they're going to the upcoming Prussian Blue concert.
F

That's fucking sick. Protesting at a funeral?! FOR NO REASON?!

They should lock these people up and sterilize the hell out of them. I hope someone puts Howie Mandel in a van and carts him around to each and every one of their funerals and ruins them (because Howie Mandel ruins everything).
C

I understand that they want the media to recognize them, get their message out there, regardless of how crazy their message is. But, at a funeral? You have to be kidding me.

If that was a friend or family member of mine, and they came to crash the funeral, I dont think I would be cool and calm about it.

Reading that type of shit makes me want to become very violent towards those bible thumping morons.
D

why not said:
Shirley Phelps-Roper, Phelps's daughter and an attorney for the church, said if legislation passes, the group will challenge it in court. "Whatever they do would be unconstitutional," she said. "These aren't private funerals; these are patriotic pep rallies.Our goal is to call America an abomination, to help the nation connect the dots. You turn this nation over to the fags and our soldiers come home in body bags."
Click to expand...

PRIMAL said:
Reading that type of shit makes me want to become very violent towards those bible thumping morons.
Click to expand...


Thing is, that's what they want. They want someone to attack them so they can sue.
S

Where do they get these ideas from?

The Christian right puzzles/enrages me more and more every day.

You should see them at the funerals of AIDS victims. Real classy with their "HE DESERVED TO DIE" signs and "BUTTFUCKERS CAN BURN IN HELL."

I feel for those poor families who want to mourn in peace...

They are one of few things in the world that make my blood boil..
I'm all about taking the high road and working for a better future instead of retaliation. But if I ever get the chance to bludgeon anyone and not be caught, it would be Phelps and his clan (I'd spare the children of course but probably not).
W

here's some video footage of the numbnuts:

You can join in on the fun here! Official Phelps God Hates Fags picketing schedule! I'll bring the TANG and macaroons!

A motorcycle group called the Patriot Guard, made up mostly of veterans, has started attending funerals to act as a buffer between the protesters and family members.
Click to expand... 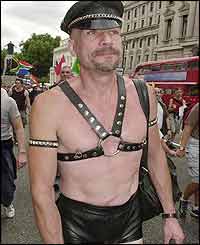 can you imagine going to a funeral of a (straight) soldier killed in iraq and getting screamed at by these psychos?
"your son is in hell!!!!"


argghh, i feel so violent about this for some reason.

Phelps and his family's schtick is as follows:

1. Perform heinous, but legal actions in the name of their 'church' in the hopes of antagonizing the public and inciting them to rage.
2. Hope that someone gets angry enough to threaten, or try to attack them.
3. Use lawyers (who are his sons) to sue the pants off everyone from 2.
4. profit.
M

What blows me away is that there is even a question or a ponder as to ban protests at funerals. WTF? Why is there even consideration to the legislation?
It should just happen.

People are fucked.
Let people make their own choices.
Let families mourn, and those that have past rest in peace.
Makes me so angry.
T

reminds me of those skid students who protested Ryan White attending their high school way back in the 80's. sick shit.

i'm usually very calm but this really upsets me, why would anybody do this?
W

i want someone to start a website called www.phelpswillburninhell.com


because if there is a god, phelps is definitely going to hell, where he will be sodomised for an eternity (hopefully with a red hot poker)
F

As Bass-Invader said, I doubt very much that it's as Jesus-related as it is greed-related. They're in it for the money.
M