Tape from a bar on Monday night and the mayor doesn't remember saying it, says Joe.
Sounds like in and of itself probably not worse than previous stuff but remember this is 1st one during everyone being all in for the election.
And I would surmise there's insults about the competitors, but I'm just spitballin'.

The recording, covertly taped by a patron of Sullie Gorman’s Monday night, captures the mayor being unruly as he’s ordering booze, complaining about his wife Renata and making lewd comments about mayoral contender Karen Stintz.

According to one witness, Ford was seen buying shooters and trying to fight with patrons in the Royal York Rd. bar Monday.

“He was really wasted,” said the witness. “And he was acting like a real ass.”

A second video of Toronto Mayor Rob Ford smoking what has been described as crack-cocaine by a self-professed drug dealer was secretly filmed in his sister’s basement early Saturday morning.

The clip, which was viewed by two Globe and Mail reporters, shows Mr. Ford taking a drag from a long copper-coloured pipe, exhaling a cloud of smoke, his right arm convulsing. The footage is part of a package of three videos the dealer said was surreptitiously filmed around 1:15 a.m., and which he says he is now selling for “at least six figures.”

Mr. Ford declined to answer questions from The Globe and Mail. Less than an hour after The Globe asked the mayor for comment, his lawyer, Dennis Morris, said Mr. Ford is planning to “take a break” from the mayoral election.

In one of the clips shown to The Globe and Mail on Wednesday, the mayor rapidly shifts his weight back and forth on the spot, talking into his cellphone and his right arm swinging at his side. When the camera pans around the room, a man that looks like Alessandro “Sandro” Lisi, the mayor’s former driver and an accused drug-dealing extortionist, can be seen in the background. Mr. Ford’s sister, Kathy, who has admitted in media interviews to being a drug addict, is sitting in front of her brother. In the last of three clips, Mr. Ford is holding the pipe and speaking to his sister.

A man who answered Mr. Lisi’s cellphone told The Globe not to call back. Mr. Lisi’s lawyer, Seth Weinstein, said: “I think the only thing I can tell you now is that, until such time the video’s contents are authenticated, it would be inappropriate to comment any further.” A reporter attempted to contact Ms. Ford at her home, but there was no answer.

The footage comes just as the mayor has embarked on what once seemed like an impossible mission – a re-election campaign styled on the importance of second chances and forgiving mistakes. Nearly a year ago, the mayor thrust himself into worldwide infamy when another drug dealer, Mohamed Siad, began approaching media outlets in Canada and the United States with a video of the mayor smoking crack. At the time, the mayor denied using the drug, only to later admit that he had smoked crack cocaine in a “drunken stupor” and that he was not an addict.

Since then Mr. Ford has been filmed numerous times in public appearing erratic and acting impaired. In each instance, the mayor has admitted to drinking, but never drugs. A few weeks ago when asked directly if he was continuing to use, Mr. Ford said: “You guys ask stupid questions.”

Clearly he has a thing for putting garbage into his body.

Is he taking time off for the campaign and/or being the mayor?

quoted from a friend of mine: "Didn't take long since Robyn Doolittle moved to the Globe for them to win the prize of first to publish the Mayor smoking crack."
S 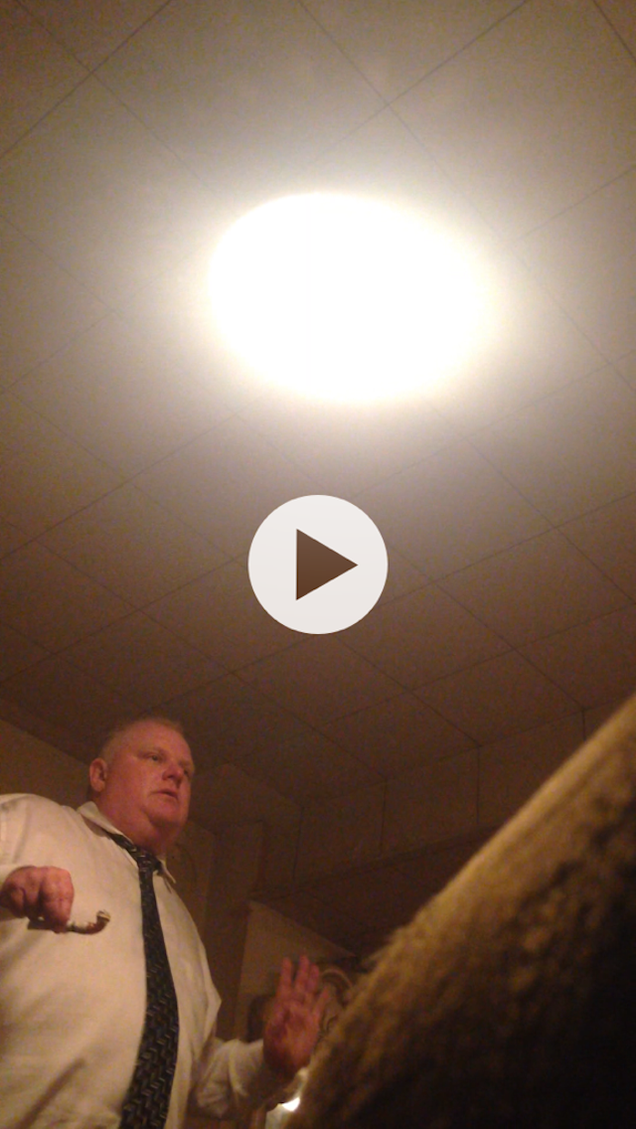 I'm guessing by the watermarking that this is an important photo for The Globe.

I'm sure BBJ will tell us with all his expertise in making McMansions that he's actually helping a TCH dweller with their plumbing and the photo is completely taken out of context.

While inhaling and holding his breath.

With the assistance of crack to help him keep his hands steady.

hahaha...how the hell is anything MORE embarrassing?
Click to expand...

So much for Warmington's hopes of being a PR agent for Ford in the future.

Staff member
It is all part of a larger campaign strategy I bet.

If he goes away for a 28 Day treatment program now, the other candidates and media will be forced to stop attacking him for at least that long otherwise they will look callous. Even now they are not attacking him very much so he will totally tie their hands up by going for treatment in some cushy residential program somewhere to plot his comeback.

Then, if he draws it out with an additional 4 week outpatient aftercare program, still considered treatment, he could get another 4 weeks, and he could relaunch himself as the "recovered Ford", the amazing come back story, for another 3 months of hard campaigning.
X

anyone who would vote for a "recovered ford" deserves to get punched in the face.
S

With the family issues and rage issues, you really think he's going to recover?

From what's been said about his family, his penchant for fucking up as royally as this, it would take him years of therapy to work this shit out. There's no way he'd get himself back into fighting form in four weeks - he's got a crack problem, a drinking problem, a PR problem, consistent father figure/rage/impulse control issues and an inability to tell the truth. These are not things that can be undone in a four week program, he'll slide right back in and cause even more damage if he doesn't bow out completely.

He could do the whole "redemption" image/storyline in the next mayoral election, but after this, I seriously doubt he's going to change his narrative into the positive and have a shot at winning.
M

Michael Cook, The Star editor is now on CP24 saying there's even more stuff floating out there. They are working on a story that will be up in an hour or so.

He says one of the three videos is rumoured to be a sex tape.

edit: that must be the Kevin Donovan story.
E

Wow. i pretty much nailed that last page.

coleridge said:
He says one of the three videos is rumoured to be a sex tape..
Click to expand...

Dude, that rumour about a sex tape is over a year old. I'll believe it when I see it.

Apart from that, this news put a Big Ol' Fat Grin on my face.

Kinda wanted to see him lose an election with no real nonsense coming out (hoping against hope, I know)
Agree with el presidente, he has no chance now, it's 2018.
It's not a first past post.
I think we can all agree turnout will be pretty good.
In 2010, it was 800-plus votes per percentage point (compared to 500 and change in 2006 and just under 700 in 2002). There's no way he can move that needle.

Of course I want to see the man get help but that kind of casual misogyny/not giving a shit about people you don't personally know doesn't get solved by not doing substances. That's at the core of the person.