All aboard the SS EDM anyone?

Staff member
They have always been associated with the grey pound, but now cruise ships are trying to attract a millennial crowd. Will smaller boats, late-night stop-offs and better brunches tempt young people on board? 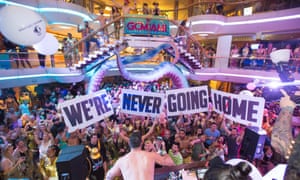 Think of cruise holidays and a whole host of images spring to mind. Endless buffets. Crushed velvet upholstery. Sex on the beach (the cocktail, obviously). His and hers dressing gowns. Jane McDonald. And, most of all, lots and lots of older people, from well-heeled fifty somethings to time-rich retirees. Millennials? Not so much.

That may be changing, though. Last July, the Cruise Lines International Association revealed that the average age of cruisegoers had fallen to a sprightly 46, its lowest figure in 20 years. (In the UK, the number is a more mature 55.) While those figures may not seem particularly dramatic, they are nevertheless encouraging for an industry that has been largely reliant on the grey pound.

A number of cruise companies are working hard to coax younger holidaymakers on board. Last month saw the maiden voyage of what is being referred to as the first line aimed squarely at millennials. U by Uniworld, which offers river cruises through various European cities, including Amsterdam, Budapest and Frankfurt, made headlines when it announced that its ships would only accept 21- to 45-year-olds. That upper age limit has since been removed – Uniworld’s CEO, Ellen Bettridge, suggests the U line is instead for people with an adventurous mindset – but the appeal to youth remains. 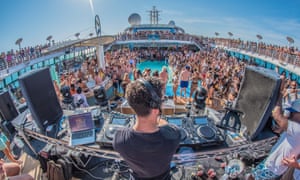 FacebookTwitterPinterest
A pool party on the Anchored cruise
On board U’s two vessels, you will find silent discos and mixology sessions, while the black-tie meals associated with P&O et al have been replaced by a more casual dining experience featuring brunch and small plates. It is practically Dalston on the Danube.

Uniworld isn’t the only established cruise brand chasing younger customers. Next year, the German firm Amadeus is launching cruises along the Rhine, the Danube and the Seine with onboard “celebrity influencers”, who will document the trip on social media. The Regent Seas Explorer offers spin classes and designer handbag stores, while MSC’s Seaside class styles itself in the manner of a Miami South Beach condo, and has a teppanyaki grill and the longest zipline of any cruise ship on the planet. Then there are the floating festivals such as Anchoredand Groove Cruise, the latter boasting EDM artists including Deadmau5 and Benny Benassi.

Those festivals build on another unlikely trend: the theme cruise. A number of these cruises emerged at the beginning of the decade, featuring bands such as Paramore and Weezer, comic book conventions and, bizarrely, the cast of the Saw horror films. Even festival giant Coachella briefly got in on the act, with a lineup that featured Pulp, Hot Chip and LCD Soundsystem’s James Murphy. 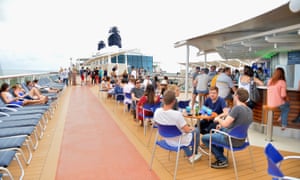 FacebookTwitterPinterest
On board the SS Coachella. Photograph: Gustavo Caballero/Getty Images
One lesson learned from these theme events is that the cruising itself isn’t necessarily the main draw. “With something like Anchored, people didn’t necessarily know they were going on a cruise. This just happened to be a floating festival at sea,” explains Adam Coulter, the managing editor of the website Cruise Critic.


Uniworld has similarly tried to play down the cruise bit of its millennial-friendly cruises, with Bettridge describing the U instead as a “floating boutique hotel that you can hop on and hop off”. It offers regular stop-offs at European cities, with the boats sitting in dock until the wee small hours for the benefit of late-night revellers. The boats are smaller, encouraging closer contact between passengers. There is also less of an emphasis on the mass group activities – the “herding around”, as Coulter puts it – of traditional cruise lines. Instead, holidaymakers are encouraged to explore, with bicycle tours, trips around food markets and visits to breweries or the beach.

Twenty-seven-year-old Nina, from Canada, was on U’s first cruise. “I have done a lot of megaship cruises and this river cruise definitely has a different feel to it,” she says. “There are fewer people and you get to interact more. I am an active person, so I particularly liked how active the excursions were. A lot of biking, for sure.

“The age group did play a factor in our decision-making,” she adds, noting that the average age of passengers on her boat was “late 20s and early 30s”. 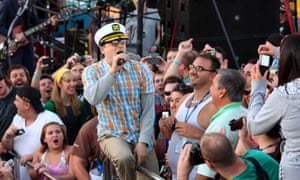 The Weezer cruise
The new style of cruising could compete with more traditional package holidays for younger customers, Coulter believes. “You’ve got a ship that’s going to, say, Mykonos, Kos or Santorini in the middle of high season, when you can’t get a hotel room for love nor money.” A cruise ship, with accommodation, food and even some booze included in the price, might start to look tempting.

How tempting remains to be seen. U’s cheapest holiday is £1,469 for eight days – less than many cruises, but still a significant outlay for most younger people. The scrapping of the upper age limit suggests they are not quite ready to throw themselves at this form of package holiday.

Yet even if the millennial cruise proves to be little more than a passing fad, it is having an effect on the wider industry. Coulter notes that some features – more time in port, less emphasis on group activities – are being adopted by the bigger lines, which are also racing to include eye-grabbing technology such as indoor skydiving tunnels and giant HD screens.

Perhaps most crucially of all, internet access – formerly one of the most retrograde aspects of the cruise experience, slow and often laughably expensive – has finally sailed into the 21st century, with affordable superfast wifi on many lines. Perfect, Coulter notes, for the “generation that wants to post selfies and put stuff on Instagram. They want their friends to know they are on a cruise.”