A new last call for alcohol?

As the Liquor Control Board of Ontario announces record profits, the province is giving municipalities the power to extend drinking hours.

After the liquor monopoly revealed yesterday that it made $1.2 billion on sales of $3.6 billion last year, the Liberal government coincidentally tabled Municipal Act amendments that will eventually allow communities across Ontario to keep their bars open later than 2 a.m.

The legislative changes will give municipalities the same authority that the city of Toronto will have from Jan. 1.

"We do not intend to proclaim that (section of the bill dealing with longer bar hours) for a couple of years to see what happens in the city of Toronto, quite frankly," said Gerretsen. "We realize there may be some interest in it, particularly by neighbouring municipalities, depending upon what the city of Toronto does in that regard," he said, noting city council will be responsible for setting bar hours in 2007. "We intend not to proclaim it for two years, but it may be less or it may be a longer period of time."

The amendments also give municipalities more control over their affairs, but they won't be granted the new taxing power that Toronto has on alcohol, tobacco, and sports and entertainment tickets.

Still, Roger Anderson, chair of Durham Region and head of the Association of Ontario Municipalities, welcomed the revamped act.

"Municipalities are capable of making their own decisions without being governed by the province of Ontario. To be able to make our own rules is an appropriate thing," said Anderson, noting that setting bar and store hours is "more local than it is provincial."

The changes were announced as the LCBO, the world's largest liquor retailer, touted an $85 million increase in profits over last year. LCBO president and chief operating officer Bob Peter credited Mother Nature and the end of the National Hockey League lockout for the bonanza.

"A hot summer, the return of NHL hockey, record holiday sales and good expense and inventory management all contributed to higher year-over-year sales," Peter said in a statement.

Beer was flying off LCBO shelves, with Ontario microbreweries' sales up a staggering 41.9 per cent and imported ales, lagers and stouts up by 10.1 per cent.

In other good news for drinkers yesterday, the province announced $10 million over three years in support of VQA wineries.

"Our support for the wine and grape sector is part of our overall strategy to build a stronger, more vibrant and more prosperous Ontario," said Small Business Minister Harinder Takhar.

Okay Dalton, get me drinking until 4am and I'll vote for you.

Ditto Much said:
Okay Dalton, get me drinking until 4am and I'll vote for you.
Click to expand...

Hey good thing they didn't sell it off to private investors eh?

so are they saying toronto will have extended hours in 2007 but no other cities until 2 years from now?

it will make for some beautiful saturday morning winery drives
C

Good for the patrons I guess, but for any door goons out there, this is a recipe for disaster.
G

my liver is crying
C

quantumize said:
I cant wait for Ontario's winery's to get old and have that nice rich tradition
Click to expand...

me too, I have been saving a bottle of Spumante Bambino since I was 16, should be amazing!
V

mr tall said:
my liver is crying
Click to expand...

my liver is making eyes at your liver right about now.
B

shit, now i'll have to relearn everything!
J

the club district would get a lot nicer
D

it was a debate, either I was going to post the article about bar hours, or about the breast Milk Cafe at OCAD.

I'm sticking with my choice although a milk bar is always a happy addition to the fold. 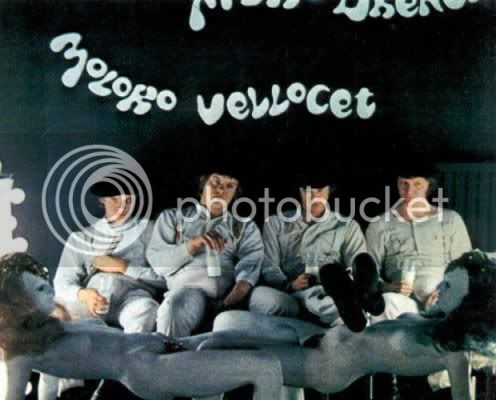 Mother's milk may be the healthiest food for babies, but is it art?

Yes, according to Jess Dobkin, a lesbian mother and artist who will present her work Lactation Station Breast Milk Bar on July 13 at the Ontario College of Art and Design, the institution of higher learning that a few years ago brought you vomiting as performance art.

The audience will be invited to sip during cocktail hours (5 to 8 p.m.) small cups of pasteurized breast milk donated by six lactating new mothers in the community. Dobkin has obtained a breast milk pasteurizer and will have the milk tested by a lab.

"I am taking all precautions," she said in an interview. "Donors have all been screened."

She is also designing a unique serving vessel for each woman. "I conducted interviews with all the donors and I worked with each to envision the appropriate serving device, the way different glasses are used for red or white wine. The vessel is designed to bring out the uniqueness of each woman's milk."

Following the "tasting," there will be an artist's talk and discussion.

Dobkin, who came to Toronto from New York, and has received grants from the Toronto Arts Council and the Ontario Arts Council, said in a news release she became interested in taboos surrounding breastfeeding.

"This project re-contextualizes something often regarded as indecent or repellent, offering a celebratory view," the 36-year-old said. "A substance that nourishes us in our infancy later becomes a curiosity in adulthood."

with files from Canadian Press
K

I STILL don't understand why "last call" even exists.

if I could find a place that seved breast milk until 4AM, then I'd be in business!

Ditto Much said:
it was a debate, either I was going to post the article about bar hours, or about the breast Milk Cafe at OCAD.
Click to expand...

apparently artists are running out of ideas or talent, not sure which.
M

i should buy stock in starbucks if this goes thru
P

Michlerish said:
whoa, last call is 2am?! I haven't stopped being served alcohol at 2 since I was 17...
Click to expand...


that's cause you are cooler than the rest of us...

Prickly Pete said:
that's cause you are cooler than the rest of us...
Click to expand...

hey, I try to make people as cool as me... but they either ditch me once we're out or cancel plans with me before we even go out.

Not you, you're cool
P

Michlerish said:
Not you, you're cool
Click to expand...

You just made my year.
M

I hope City council acts as "progressive" as they like to think they are.

This sounds civilized. It might even solve 2am debauchery in the Entertainment district.
A

It didn't when they moved the line from 1am to 2am.