Wiseman said:
It was fun to watch but the more I think about it the more it is disappointing. So much was done in the service of cool visuals and moments for minor characters rather than story and lore.


What was the point of light the Dothraki swords on fire if they die immediately? Cool visual.

Bran Warged into his Ravens for no purpose at all except to fly them by the Night King. He literally did nothing that entire battle.

And what about all that lore that seemed to set up Jon as the one to challenge the Night King. Like what did Jon actually contribute to the battle?

Seemed like they structured the battle around fan service and cool things they wanted to put on the screen (Dragon Dogfight for example).

It was definitely cool to watch but I think a let down when it comes to the build-up to the Night King over 7 seasons. [\Spoiler]
Click to expand...

I am hoping we get more about "where bran was" and it will figure into next few eps somehow. I believe there was a purpose and we'll find out - they kept cutting back to him to show him deep in the mind-world or whatever but without showing us anything more after the ravens flew past the king - so I think thats the show telling us there's a little story there in where he went!

you know the alt-right is in their own fucking private little Shit Bubble when Arya fuckin Stark is said to be a Mary fucking Sue.

What a bunch of know-nothing twats

I could have gotten behind Dany still killing Cersei and demolishing the Red Keep after the surrender bell was rung, to quench her thirst for revenge over Rhaegal & Missandei. But to see her turn completely to the Dark Side, zig-zagging through King's Landing to kill as many innocents as possible, seemed completely out of character and made little sense.

This is not a fitting end for one of the best female characters ever created. Too bad for all the kids named "Daenerys" and "Khaleesi" in recent years. Hahah.

I felt sympathy for Cersei at the end.

Jaime being mortally wounded by Euron Greyjoy seemed like a cheap death.

I'm still stoked for the series finale, but my anticipation level is lower than it was prior to the Battle of Winterfell.

The series could be saved if Arya has a kid and names him Tony.

I loved the battle of Gregor vs Sandor and Sandor fucking knocked that one out of the park. I was still hoping we'd hear a word out of Gregor but now I'm wondering if the reason why is he isn't breathing

The WinterIsComing Book readers version of the recap has the same issue you do with Daenyrs and your comment on those babies with the name made me LOL for real!

I think in the WIC recap they show some of what the showrunners gave us and I think the issue is really compression, was too quick a sequence and so we don't believe the change

But if you walk back through it you can see them trying to build her internal tension to this breaking point, they gave us the reasons but it wasn't enough for us to feel.

The whole series has suffered for a compression of the book plots, a pulling back of depth that hurt in all kinds of ways but was overcome in early seasons by the depth of what it DID bring to the table.

So you really need to work your imagination to fill the gaps and connect the dots they give you, so quickly are they running through it.

People needing to work at something is a recipe for audience alienation, and probably the wrong way to end such a beloved property.

I still think we will rank Lost and Dexter as having had worse final seasons with Battlestar Galactica in the running too on the back of only its final few hours, which were atrocious
Last edited: May 13, 2019 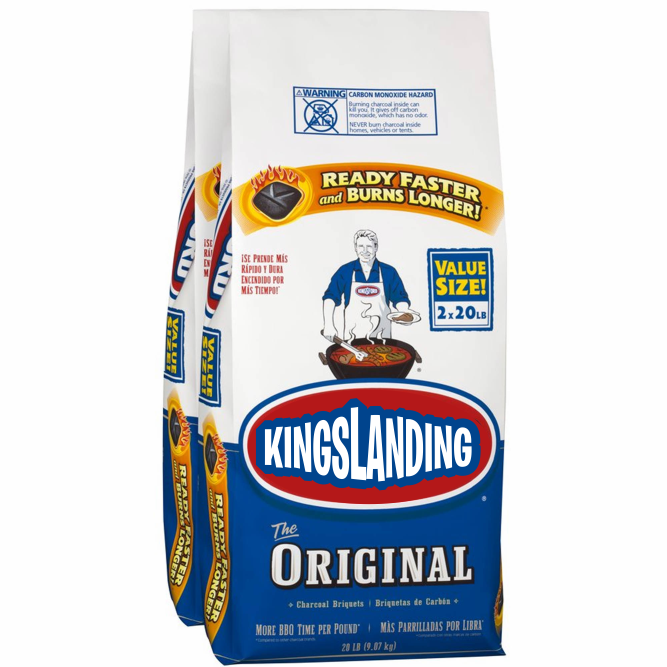 George R.R. Martin shoots down The Winds of Winter rumor 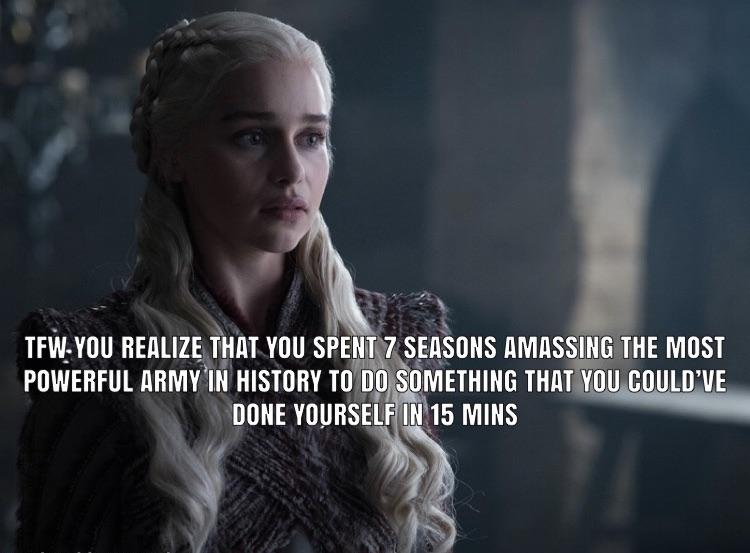 Did anyone score free tickets to see the series finale on the big screen for Sunday?

I will say this.

Prison Break did a better job of a final season, just compared to what came before in the series, it was actually pretty awesome!

I'm thinking in terms of the major beats for major characters and the suffering of the people of kings landing, I fully expect the final books to hit the same or similarly disappointing notes, just with a lot more heft to it

One thing about the ravaging of King's Landing is it brings the series back from the beautiful/powerful protagonists in the center of it all to where the books brought us often: the cheapness of life if you're a peasant, the wanton way the lords will grind them under them on a whim.

The book's missing character from the show, seen only fleetingly, was the suffering of the common people in a country and countryside ravaged by long running conflict. When the chips are down their lives are cheap as fuck in Westeros
S

I was hoping that Bran warged into Drogon and made it destroy the city, otherwise his power kinda sucked.