Season 7 will be only 7 episodes, and we have to wait until summer of 2017. Boourns.

‘Game of Thrones’ Spinoffs in the Works at HBO

I thought the opener was a good way to bring us back into the world, but not much happened after Arya killed the Freys. (Btw, I assume spoiler talk is fair game after each episode airs.)

The Hound's scenes were alright.

I really liked the interplay between Jon and Sansa, with her telling him that he has to be smarter than Ned/Jon, and suggesting that she has learned much from Cersei which could be used to help. Their disagreement on how to treat the traitors was interesting.

I liked Arya's meeting Ed Sheeren and the other soldiers, showing that soldiers on both sides can be decent folk.

Now that Daenerys and company have reached Westeros, hopefully next week's episode will include some long-awaited meetings and reunions!

I think Daenyrs, beyond the "family revenge" motivation to destroy the Lannisters, would also gain politically by picking them out for her first target.

If everyone hates the lannisters? Destroying them brings everyone to your side
K

So Jamie is the one who will kill Cersi, who else thinks this?
S

kyfe said:
So Jamie is the one who will kill Cersi, who else thinks this?
Click to expand...

What about Arya wearing a mask of Jamie?

kyfe said:
So Jamie is the one who will kill Cersi, who else thinks this?
Click to expand...

Yup I think there is a pretty good chance of this. I think this is his redemption moment then he dies this season.

Staff member
I hated the product placement of Ed Sheeran. I wondered how much Warner Music paid to have him appear. Next up - King of the North drinking Budweiser.

Not the first... kind of a running gag really.
'Game of Thrones': Complete Guide to Musician Roles & Cameos

^ I didn't think of Ed Sheeran as product placement, but rather as a superfan who wanted to do a cameo, like James Bond as a stormtrooper.

The Rolling Stones article says it was for Arya's benefit, which is a nice story.

I think all the fan backlash is a bit silly, but then Ed Sheeran's face is not as instantly recognizable for me as it is for others, so it did nothing to distract me from the episode.

Dany's interrogation of Varys, ignoring Tyrion's attempts to defend him, and Varys holding his own, was great to watch, as was Dany eliciting Varys' promise to look her in the eyes and let her know (rather than scheme behind her back) if he ever believes she is not acting in the best interests of the people.

The war room scene, as Tyrion explained how the conquest would go, was great. I enjoyed the conflict between Tyrion's cleverness and Olenna/Ellaria's "attack now" approach.

Seeing Dany learn of Jon Snow ("He sounds like quite a man") gave me shivers. Six more sleeps (possibly) until the most anticipated meeting of characters in seven years. Will Jon "bend the knee" or will he find another way to win the friendship/loyalty/trust of his aunt? Will Jon, with his Targaryan blood, be able to touch/ride the dragons?

Jon's war room showdown with Sansa and the Lords of the North (even Lady Mormont this time) about his decision to accept Dany's invitation to meet in person was another epic scene in that room. Hopefully, Jon's decision to not accept Littlefinger's offer of friendship does not result in his demise.

The pirate ship ambush at the end was a great episode twist. It looks like Euron Greyjoy will be the new sadistic villain that we love to hate. Disappointing that Theon pussed out. One wonders if his character will have an ultimate redemption at some point.

I got more shivers when Arya reunited with Nymeria, although I did not understand her "That's not you" line. Perhaps we will see Nymeria and the wolf pack join the battle royale - Wolves and Dragons vs. Frost Giants and Zombies - that we are all expecting.

Klubmasta Will said:
Episode 7.02 was killer.
The pirate ship ambush at the end was a great episode twist. It looks like Euron Greyjoy will be the new sadistic villain that we love to hate. Disappointing that Theon pussed out. One wonders if his character will have an ultimate redemption at some point.
Click to expand...

I thought the ambush was really weak. Kind of ruined an otherwise good episode for me. Shows up out of nowhere without being noticed right onto her ship. Easily defeats the sand snakes, whom I didn't even like, but just felt like a quick plot cleanup.

CiG said:
I thought the ambush was really weak. Kind of ruined an otherwise good episode for me. Shows up out of nowhere without being noticed right onto her ship. Easily defeats the sand snakes, whom I didn't even like, but just felt like a quick plot cleanup.
Click to expand...

I dont wanna be one of those people

But the snakes were way cooler in the book

praktik said:
I dont wanna be one of those people

But the snakes were way cooler in the book
Click to expand...

Yeah Snakes kick so much ass in the book.

Agreed the ambush made no sense. Assuming as the "Command Ship" they would be at the centre of the fleet there is no way Euron could get that close before they noticed.

Umm I couldn't make it through the Greyscale scene and fastforwarded.

Maybe his ship is so cool I didn't mind it too lol!

Thrones is filled with turnovers like this:shit happens, and people pull off moves.

Maybe the show didn't telegraph it enough in Euron's scene with Cersei, but in terms of fitting with the source material it makes sense to me.

That final scene was haunting. Asha was like a Starkian Greyjoy, perhaps a sign, again, of how there are few good men among the living in Westeros
L

One of the Sand Snakes wanted/needed to be killed off cause she couldn't commit to the series anymore.

Waitasec, Nymeria is the name of both a dire wolf and a sand snake? Did he run out of unique names?

they are both named after the same warrior queen: Nymeria

Klubmasta Will said:
I got more shivers when Arya reunited with Nymeria, although I did not understand her "That's not you" line.
Click to expand...

apparently this is a callback to a conversation arya had with her father about getting married and having babies or something like that, and she replied "that's not me."
S

Did You Catch This Thrones Throwback in ‘Stormborn’? 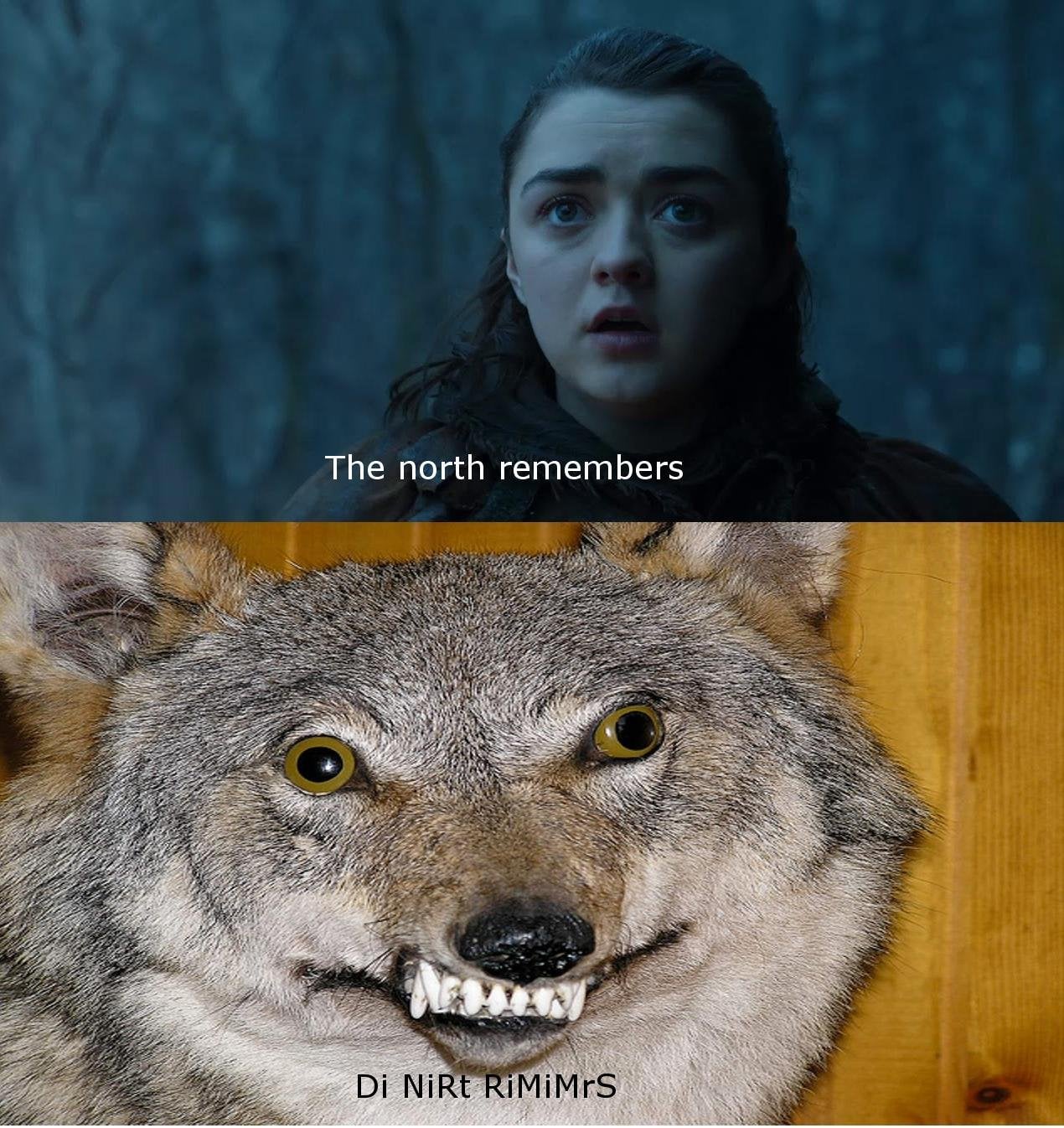 Episode 7.03 (The Queen's Justice) was another epic episode.

Dany and Jon's first and second meetings were well handled. Jon did the North proud by not giving in, and Dany proved her worth by not having him killed for refusing to bend the knee and for allowing him to mine the dragon glass. I was hoping one of the dragons would have responded to Jon's presence, but maybe that is coming.

Interesting to see the Lannisters win the first two battles against Dany's Alliance (which seemed invincible two episodes ago), giving up Casterly Rock while taking Highgarden and its riches instead. A brilliant and unexpected move, showing that Cersei and Jamie may be more clever at war than Tyrion.

Sansa's scenes as ruler of Winterfell, and in keeping Littlefinger in his place, were great. Her reunion with Bran was odd, perhaps because he's a bit of an awkward actor. I can't wait to see Arya reunite with Sansa and Jon.

Olenna's death, and parting shot at the Lannisters in revealing that she murdered Joffrey, was a great final scene for this great character.

In other news, anyone have thoughts on the #NoConfederate stuff, or will you wait and see what the show is actually about?