a freak of nature...

the easter bunny's got nothing on this guy...

holy shit!! look at the size of this thing... 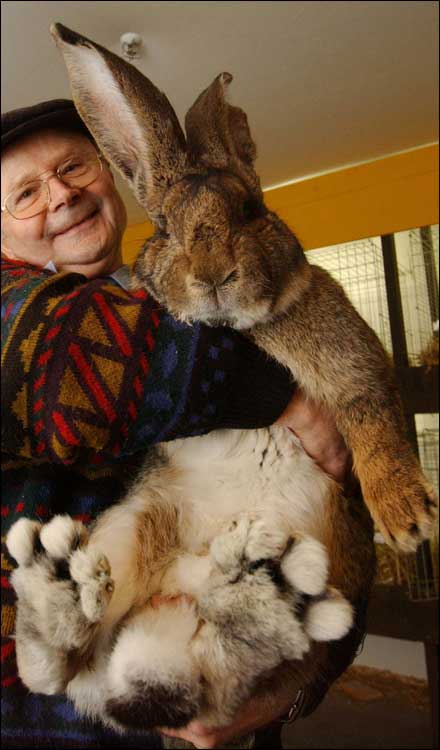 my lord look at the size of its feet!
G

even if it is not a photoshop job, I diagree based on morals, with bunnies being that large.

I saw a wild hare in a Geseke, Germany field that was just as big. Thought it was a small dog at first.
D

Ditto Much said:
my lord look at the size of its feet!
Click to expand...


just think of all the offspring this guys producing... he's surely a hit with the females and you know what they say about rabbits. lol

just a second its only 16 almost 17 pounds, so maybe the man was really small and it was a creative photographer.
P

thom100 said:
just a second its only 16 almost 17 pounds, so maybe the man was really small and it was a creative photographer.
Click to expand...


might be abit of camera angle playing a factor there but still... that's still one big rabbit! (eats 2kgs of food a day? eek. lol)

he looks so cuddly

Imagine how much luck is in those feet!!

it's the curse of the were-rabbit.
D 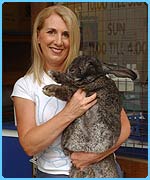 He might look like a child in a fluffy suit, but monster-sized Roberto is just a very big rabbit!

At a whopping 16kg, and measuring over a metre-long, two-year-old Roberto could be the biggest bunny ever.

His owner, Annette Edwards, said: "He can't fit into a normal size hutch, and even has to sleep on a dog's bed."

A Guinness World Records spokesman said Roberto was the biggest bunny they'd heard of, but they no longer awarded records to big animals.

That's because they're worried that pet owners might deliberately over-feed their pets to get in the record books.

Mrs Edwards hopes that Roberto is fully grown, although Continental Giant rabbits can live for 12 years.

Considering he's bigger than most three-year-old children already, we can see why!

this is just bunny goodness.
I am happy now.

Staff member
its head is bigger than a satellite dish:

i thank god the internet was invented so that we can look at pictures of monstruously oversized house pets.

mingster said:
i thank god the internet was invented so that we can look at pictures of monstruously oversized house pets.
Click to expand...