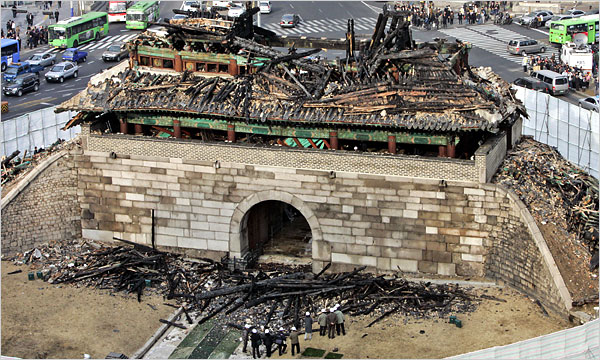 SEOUL, South Korea — The 600-year-old southern gate to what was once the walled city of Seoul, a landmark that survived foreign invasions and wars to be designated South Korea’s top national treasure, burned down Monday.

The collapse of Sungnye Gate — better known to Koreans and foreign tourists as Namdaemun, or “Great South Gate” — shocked the country. “The Republic of Korea could not even defend its national treasure No. 1!” one front-page newspaper headline lamented, using South Korea’s formal name.

Kim Young-soo, a district police chief, said investigators were looking into the possibility of arson. “With this fire, our national pride was burned down as well,” said Lee Kyung-sook, top aide to President-elect Lee Myung-bak, who rushed to the scene of the blaze Monday.

Namdaemun, made of wood and stone with a two-tiered, pagoda-shaped tiled roof, was completed in 1398 and served as the main southern entrance to Seoul, which was then a walled city. It was the oldest wooden structure in the country, an iconic reminder of old Korea in this modern Asian city, the capital of South Korea, and a major tourist attraction. The site is surrounded by a bustling commercial district, and had lately been used as shelter by homeless people.

The gate survived many Chinese and Japanese invasions that devastated the city. It was repaired several times, most recently after the Korean War of 1950-53. When the South Korean government cataloged its national treasures in 1962, it gave the gate the No.1 ranking.

Some historians opposed that designation because Japanese invasion forces had passed through it in the late 16th century to destroy Seoul.

The fire was first reported Sunday evening. By late Sunday night, firefighters believed they had contained it. But the flames reignited after midnight and finally destroyed the structure, despite the efforts of over 360 firefighters.

“The gate has been our representative cultural asset that has been with us for 600 years,” Mr. Cheon said in a regular news briefing. “All Koreans were shocked and hurt when they saw the gate crumbling in flames.”

The Cultural Heritage Administration said it would spend three years and $21 million to rebuild the structure.

Namdaemun succumbed to the very thing it was designed to fight off, according to Korean legend: fire. Korean kings chose the site in the belief that the gate would protect the national capital from the fiery spirit of a mountain south of Seoul, historians say.
Click to expand...

welcome to the future

It's about time they tore that place down!
F

The future of burning down landmarks.

You're next, Fort York.

Flashy_McFlash said:
The future of burning down landmarks.

It will be rebuilt.

No way that was made of original wood from 600 years ago. So what's the difference if you replace one plank at a time, or replace them all at once. Either way it isn't the same building as it was 600 years ago.
A

Flashy_McFlash said:
The future of burning down landmarks.

I'm actually surprised Fort York is still standing after all these years of hosting the Toronto Beer Festival.

Deus said:
It will be rebuilt.

No way that was made of original wood from 600 years ago. So what's the difference if you replace one plank at a time, or replace them all at once. Either way it isn't the same building as it was 600 years ago.
Click to expand...

Biggest let down after visiting any european city bombed in WW1/2.

Tourist.
"Wow this building is beau-"

this is crazy. it burned down on sunday night. i was there on sunday afternoon taking pictures! i was shocked to hear the news.

this area is actually one of the more beautiful areas in seoul. the gate is located in the middle of a huge busy street and serves as a traffic roundabout.

the gate looked gorgeous at night:

There are several other ones around the city. But that one was by far the nicest.

I drank some soju around there once.

SEOUL (Reuters) - South Korean police said on Tuesday they arrested a pensioner who confessed to burning down a 600-year-old gate designated as the country's number one national treasure because he was angry about a compensation payment.

The stone and wood structure Namdaemun, or "Great South Gate," was reduced to a charred hulk on Monday, with newspaper editorials lamenting the destruction of an iconic symbol of national pride.

Laborer Heo Eun stood at Namdaemun and summing up the sense of loss and shock shared by many South Koreans said: "It feels like the heart of the nation was destroyed overnight".

The 69-year-old suspect is a convicted arsonist identified only by his family name Chae, said Namdaemun police station chief Kim Young-soo. Chae was taken into custody late on Monday and told police he had planned the fire for several months.

"(He said) he committed the crime out of anger because he felt the government did not take enough care with the appeal he filed after being insufficiently compensated for redevelopment in his residential area," Kim told a news conference.

Chae, who was given a suspended sentence after setting fire that singed a small part of a palace in Seoul in 2006, said he used a ladder to climb into the gate's pavilion. He then poured paint thinner on the floor and set it ablaze, police said.

"I would like to say sorry to all South Koreans. I cannot apologize enough to my children and the people of this country," Chae told a group of reporters at a police station.

Newspaper editorials on Tuesday said the loss of Namdaemun was an embarrassment that could have easily been prevented through better security and fire fighting measures.

The gate was the oldest wooden structure in Seoul. It had withstood invasions, colonial occupation and was one of the few historic structures in the capital to remain standing after the 1950-1953 Korean War.

"It was ruined in six hours due to our lack of care and attention," the mainstream JoongAng Ilbo newspaper said.

Experts said misjudgment by nearly everyone involved led to the devastation. The head of the Cultural Heritage Administration, whose agency faced stiff criticism for its management of the national treasure, offered to resign on Tuesday, a government official said.

Many of the thousands who viewed the ruins pointed fingers angrily at politicians, bureaucrats, firefighters and police for failing to protect the landmark.

Some blamed the outgoing government of President Roh Moo-hyun, which had a separate national treasure burn down in a forest fire during its watch, for not learning from that loss.

Others castigated President-elect Lee Myung-bak, who as mayor of Seoul allowed the gate to be opened to the public and promoted it as a tourist destination. Chae told police he selected Namdaemun because of its easy access.

The gate, used as the centerpiece of the country's international tourism campaign, was constructed in 1398 and served as the main southern entrance for Seoul when it became Korea's capital more than 600 years ago and was a walled city.

Ancient kings built gates at specific locations in the belief they would strike a balance with nature that could bring them fortune or block evil spirits. Namdaemun was one of the great gates and built to block the energy of fire and protect the main Gyeongbokgung palace a short distance to the north.

The structure, also called Sungnyemun or "Gate of Exalted Ceremonies", has been restored several times. The last major renovation took place in the early 1960s.

An official with the Cultural Heritage Administration said it would spend three years and 20 billion won ($21.2 million) to rebuild the structure.

More pics of the fire and this article can be seen @
http://www.reuters.com/article/topNews/idUSSEO27238420080212?feedType=RSS&feedName=topNews

Deus said:
It will be rebuilt.

No way that was made of original wood from 600 years ago. So what's the difference if you replace one plank at a time, or replace them all at once. Either way it isn't the same building as it was 600 years ago.
Click to expand...

It will be rebuilt of course. It's also not about the age of the wood. It's Korea's #1 National Treasure for a reason. The structure holds alot of symbolic meaning as it represents Korea's perseverance over Chinese, Japanese and communist North's occupations. It'd be the equivalent of the Statue of Liberty blowing up.

KickIT said:
It'd be the equivalent of the Statue of Liberty blowing up.
Click to expand...

Gods wouldn't that be awesome. Seeing the Americans go crawling to the French asking them for the blueprints so they could rebuild it... Then the French could be all like, ah, so we are to forget temporarily about the Coalition of the Willing, and the Freedom Fries, and etcetera.